Toyota has announced that TMG is developing a rear-wheel drive GT86 CS-R3 rally car, which will compete in the 2015 season. Details here 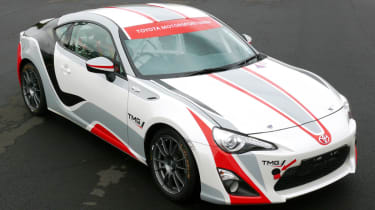 Toyota has announced that its German-based Toyota Motorsport Gmbh division is currently developing a new rally car, which will be based on the rear-wheel drive GT86.

TMG’s GT86 will be built to R3 specifications, keeping the rear-wheel drive layout, which the company says is ‘sure to be entertaining for drivers and fans alike’. Despite being in development now, it’s unlikely we will see a GT86 competing in the WRC before the 2015 season.

Toyota has confirmed that the GT86 R3 will be based on the current CS-V3 endurance racer that TMG currently offers, although due to the different regulatory requirements needs quite a few changes to be FIA compliant. The GT86 R3 will get a more powerful engine, six-speed sequential ‘box, bigger brakes and all of the safety equipment needed for rallying.

There are no official details on the price or specific specs from Toyota yet, but will be announced at a later date.