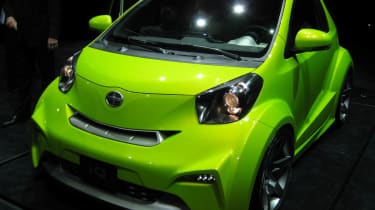 Toyota’s Scion sub-brand, aimed at ‘young urban trendsetters’, has got its hands on the iQ city car and given it an ultra-aggressive makeover. Called the Scion IQ Concept, it takes what you previously thought feasible with a car less than 10-feet long and rips up the rulebook completely.

Extra-wide Yokohama tyres are wrapped around 18-inch alloys, stuffing the arches to capacity, and giving the tiny Toyota a stance that punches well above its weight. Custom LED lights at the front and rear, plus a centrally mounted trapezoid exhaust pipe add more detail to the already futuristic styling.

Five Axis, a Californian tuning firm, were drafted in by Scion to create the maxed out bodykit. And with crazy blistered arches, ground hugging front and rear spoilers and the blinding luminous green paint job, this car has more presence than the rest of the Toyota range.

Inside the cabin, there’s modern honeycomb fabric on the seats, plus a scuba-like polyurethane headlining to give the interior the cutting-edge feel of the outside. A 10in LCD screen sits flat on the dash when not in use, but rotates into action when needed to control the various entertainment functions.

The car is strictly a concept at the moment, but Scion is convinced that small but funky cars like this are the future. And for a US only carmaker to be embracing a smaller and more fuel-efficient model so openly is excellent news.