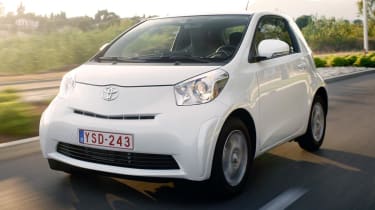 We all thought the Toyota iQ, on sale at the end of the year, is the car a four-seater Smart should have been: short, wide, chunky, a car for free thinkers. But that's before the marketing people, a notoriously conservative bunch at Toyota, stepped in. Now it is to be positioned as a compact urban luxury car. 'At under three metres it's the smallest premium four-seater,' says chief engineer Hiroki Nakajima. 'It has A-segment size, B-segment performance and C-segment quality.' This will also mean a Yaris-sized price tag, in order not to queer the Aygo mini-car's pitch. Compared with the original iQ concept car, the production version loses the triangularity of the headlights and tail lights in favour of larger, grander, glitzier items to make it look 'more premium'. Inside, the door casings are in hard brown plastic – a 'premium' colour – while the dashboard is in grey and black and the seats' backrests have a pattern different from that of the cushions. It looks like a mis-build but that's how it's meant to be. There's innovation here, though. Scooping out the passenger-side dashboard and footwell lets the passenger sit far enough forward to accommodate another adult behind, while a child can just fit behind the driver. The boot might just take a MacBook Air, other storage is minimal and the iQ is the first car with rear head airbags – needed because the rear window is so close to the heads. Most intriguing of all is the repositioning of the differential in front of, instead of behind, the gearbox. This lets the front wheels sit further forward, reducing the ungainly overhang that blights too many new cars, while releasing crush space ahead of the engine. It seems an obvious solution but other carmakers have avoided it because of the need to develop expensive new transmissions. The iQ's engines, all three-cylinder units, are 1.0 and 1.3-litre petrols and a 1.4-litre diesel. The smallest engine produces just 99g/km CO2, a petrol-engine best.