Racesuit construction is a black art. Roger Green visits the Alpinestars factory to see how the cloth is cut 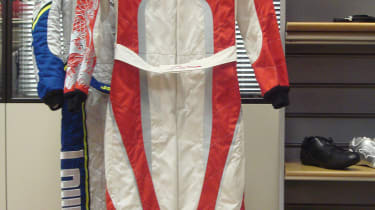 For the average trackday driver and racer looking good is probably the over riding reason why one racesuit is chosen over another. Price obviously has a bearing too, getting kitted out in the latest suit, boots and gloves can easily cost well over a thousand pounds making the most expensive outfit you’re ever likely to own. Are they really worth it? Just why do they cost so much? And is the top-end stuff really worth the premium?

For the past four seasons I’ve been using a suit from Italian manufacturers, Alpinestars and as it has proved both comfortable and durable it made sense for me to go with them again. But before finalizing the decision, this time I wanted those questions answered, which meant hopping on a Ryanair flight to Treviso and a half-hour drive to Asolo, nestling in the foothills of the Dolomites.

Named after a perennial flower found in the region, Alpinestars began by hand making ski and mountain boots in 1963 but it wasn’t before founder, Sante Mazzarolo had turned his attention to the growing sport of motocross. Motorcycling in all its forms is still the major thrust of their business, but in 1992 they began to make auto boots, using both the knowledge gained from bike competition and the implementation of a dedicated research and development facility they immediately made a big impact on the scene.

It is the R and D department, tucked away in the basement of the modern, spacious head office building where we head first, where the variety of testing that each piece of leather or cloth is subjected to is extraordinary.

The walkmeter is demonstrated first, but perhaps it should be last as this machine simulates a boot actually walking to give a new boot design a final test for integrity and durability. The machine replicates the walking motion and can be set to simulate various body weights, surface conditions and stride patterns and subjects each boot to 100,000 cycles. Fieldtesting is also performed but this machine saves the development team having to hike across the mountains in their latest creations.

Moving on, the climatic chamber places the products in extreme climatic conditions – the tropical storm is common in this machine, forcing the equipment to withstand temperatures up to 70 degrees Centigrade with 70 per cent humidity – and is capable of simulating five years of exposure in a week, crucial when your products spend the first part of their lives in shipping containers. This goes alongside the washing machine, which not only tests for dimension change and colour fade, but also the effect repeated washing has on flame resistance. Unsurprisingly the FIA are, quite literally, hot on this, setting very high standards, as we’ll see later.

The abrasion testing machine also examines wear, this time by rubbing the material against various surfaces, the interesting point to note here is that colour dye can have a massive effect on the abrasive resistance of leather. This can also be shown up on the deflectomter, which examines each material type and colour combination’s resistance to repeated flexing. Then there’s the UVA exposure test capable of exposing the material to a year’s worth of sunshine in a day and the dynamometer designed to test the tensile strength on any material, any bonding and any type of stitching.

And if an item can withstand all that it’s then given the flame test, where it’s checked to ensure it surpasses the FIA requirements for both heat resistance and transmission. Obviously crucial, the requirements are very demanding. The transmission runs at 1000 degrees and to pass the material has to protect a sensor from climbing 24 degrees in eleven seconds and afterwards that material has then to be able to withstand five foldings in each direction. For fire resistance the requirement is for the material to withstand a flame (which has a temperature at the tip of 700 degrees) touching the cloth for ten seconds. Both these tests are comfortably (although that’s probably not the right word) exceeded by all Alpinestars suits.

There’s more too, their programmes in F1, Indycar, Nascar and rallying are all run from Asolo and the feedback and development they carry out with the top drivers and then incorporated in the next clothing range. Since Michael Schumacher retired from F1, Alpinestars have been working with him on racesuits, kartsuits and bike leathers (where he’s tested the suit’s crash characteristics on several occasions). His feedback has been exceptional in its level of detail, and the suit developers have gained a lot through working with him.

If the suits have gone through all this and are good enough for a seven-time world champion, then I reckon they must be ok for the likes of us. My new suit is on order…