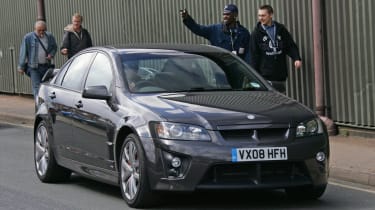 Since last month’s Bank Holiday-long honeymoon getting to know the VXR8, the following three-and-a-bit weeks have been a lot less exciting, largely involving a daily schlep around London.

On the open road one of the revelations about this car is that it feels surprisingly wieldy, but the same is remarkably true in town. As it rumbles down urban rat-runs, the Vauxhall doesn’t feel like the big old bus you might expect, and thanks to a long wheelbase and tight damping it’s even pretty good over speed bumps.

The only poo in the soup is… well, you can probably guess this bit. It’s to do with petrol. Just out of interest, I zeroed the computer before an eight-mile cross-town trot from my place in North London to the BBC offices out West and at the end of the journey the VXR reckoned it had averaged 10.6mpg. Ouch. The properly calculated juice-sluice for the month is a bit better than that. But only a bit.

Yet as I sit at traffic lights feeling the V8’s tickover torque gently rocking the whole car on its springs, I’m learning to focus on why the VXR8 makes me smile, not why it’s slowly cleaning me out. But then, with all thoughts of fuel bills set to one side, the real problem with using a piece of kit like this in the city becomes apparent: it feels caged and restless.