Moral corruption comes in many guises, but none so glorious as this, the supercharged, 493bhp Monaro VXR 500 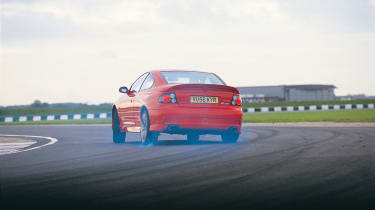 Conceived by Vauxhall dealership Greens of Rainham together with Holden tuning specialists Wortec, the limited-edition VXR 500 is a last hurrah for the big-hearted, Aussie-built coupe, which was killed off in a GM rationalisation purge earlier this year.

Undeniably mighty, if somewhat misunderstood by the car-buying public at large, the standard 6-litre V8 Monaro VXR found a keen cult following in the UK, but that didn’t translate into significant sales, and until very recently as many as 50 examples remained unsold.

Enter Greens, who had already teamed-up with Wortec earlier this year to build a one-off supercharged Maloo ‘ute’ (a two-seat Monaro-based pick-up sold in Australia) with 600bhp, which Vauxhall had been using as a VXR promotional vehicle. Having run impressively and been trouble-free throughout the year, when Greens proposed building a small run of ‘milder’ 500PS (493bhp) Monaros, Vauxhall had no problem endorsing the project, or in honouring the car’s warranty.

Now, having purchased an initial batch of ten cars, Greens are building VXR 500s to order, the first three having gone to Vauxhall’s press fleet. At £35,995 – that’s £1000 less than the price of a standard Monaro VXR – the VXR 500 is spectacular value for money, in effect delivering BMW M6 poke for BMW 335d cash.

This compelling and charismatic car can be made all the more complete by the additional fitment of Wortec’s suspension, brake and acoustic packages. Unsurprisingly, our test car comes so equipped, and though the further upgrades raise the total price of a VXR 500 to £41,245, it remains an extraordinary machine, as we’re about to discover.

One of the best aspects of the VXR 500 is that it looks virtually identical to the standard Monaro VXR. That is to say big and muscular, but not overtly aggressive in the style of, say, an Evo or STI. Peer through the standard alloy rims and you can clearly see the £2595 AP Racing brake conversion, comprising grooved and drilled 363mm front and 330mm rear discs clamped by six- and four-pot callipers respectively, while a look at the rear of the car reveals a pair of sizeable oval tailpipes. A smattering of ‘500’ badges have also been added, but these could easily be removed, which would make for the ultimate covert conversion.

However, with or without the badges, the cloak of anonymity only lasts as long as it takes you to climb aboard, depress the clutch and twist the 5967cc beast into life, at which point a shockwave of rich, bassy V8 thunder explodes from the tailpipes, overlaid with a menacing whine from the simmering supercharger. And this is only with the £960 ‘cat-back’ Stage One system fitted. Stage Two must sound like Armageddon.

Though the ride height is only marginally reduced and consequently hard to spot from outside the car, the £1695 Wortec AVO suspension package yields tangible improvements once behind the wheel. Taut but retaining decent pliancy, the suspension works extremely well over a wide range of surfaces and brings increased alertness to the Monaro’s responses without feeling ‘aftermarket’ or track-biased. If anything, there’s room to go a little bit more aggressive on the set-up, but as Wortec works closely with AVO, it would doubtless be possible to tailor the settings to suit your needs. Only the steering lets the VXR 500 down, remaining fractionally slow-witted and light on feel.

There’s nothing remotely slow-witted about the VXR 500’s main attraction: that extraordinary engine. Very little can prepare you for the way it delivers its performance, such is the instant and explosive force with which it throws you down the road. Where the standard, naturally aspirated 6-litre always felt a bit lazy in its delivery, this supercharged motor is rabidly potent, with hard, insistent, premier-league shove on tap at any revs and in any gear – including sixth, which is impotent in the standard VXR Monaro thanks to its interstellar stride. Vauxhall claims the VXR 500 will hit 60mph in 4.9sec and breach 185mph. To say it feels every bit as fast as the claims is an understatement. Even Harry ‘I drive a Zonda everyday’ Metcalfe reckoned it felt ‘f*****g rapid’.

It’s hard to imagine a faster and more entertaining car for the money, but as Greens will also fit the engine, suspension and brake conversion to a used Monaro, you could save a further £5K or so by buying a nearly new Monaro VXR then adding the upgrades – either all at once, or in stages as and when your finances allow – for less than £11K, including fitting and VAT. Either way, it’s a unique opportunity to taste supercar performance on a real-world budget. 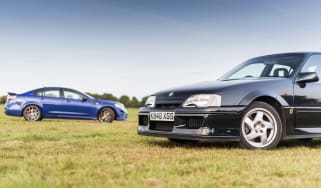 Vauxhall's final, brilliant VXR8 GTS-R celebrated the end of the Aussie muscle car, can it still learn anything from its great granddad?
Visit/vauxhall/vxr8/18736/vauxhall-maloo-vxr8-lsa-review-tiff-needell-drives-the-brute-ute 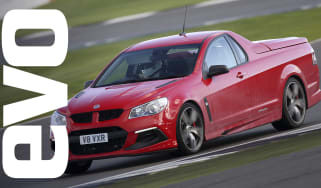 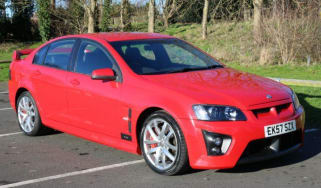 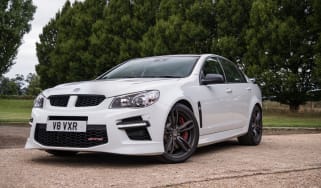 The most charismatic super saloon on sale
Visit/news/evonews/291394/holden_to_stop_building_cars.html 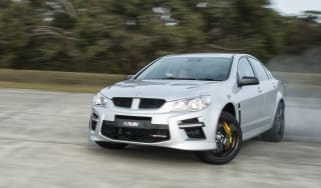 GM has announced that it is to shut down production of Holden cars in Australia. Details here
Visit/vauxhall/vxr8/7287/vauxhall-vxr8-gts-review-price-and-specs 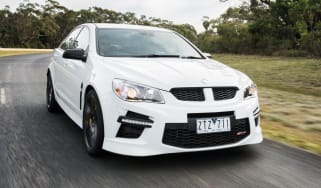 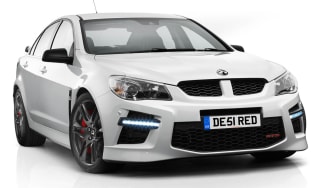 The new 576bhp Vauxhall VXR8 GTS has been launched, with the new Camaro's supercharged LSA engine as well as some styling and spec tweaks.
Visit/vauxhall/vxr8/6241/vauxhall-monaro-buying-guide 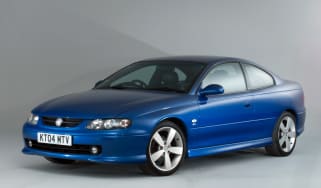 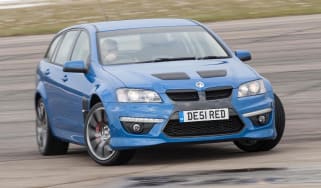 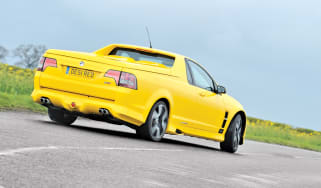 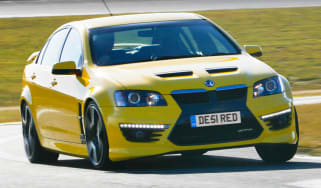 Our first driving impressions of the new Vauxhall VXR8, now available with an Auto and MRC dampers
Visit/vauxhall/vxr8/11574/new-vauxhall-vxr8-in-showrooms 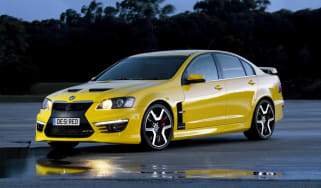 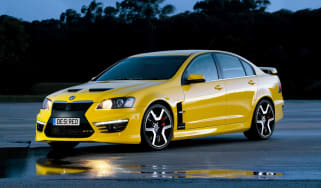 Vauxhall's muscle car, the V8-engined VXR8 sports saloon, gets an upgrade for 2011
Visit/vauxhall/vxr8/11298/video-chevrolet-camaro-ss-v-ford-mustang-gt-v-vauxhall-vxr8-bathurst-s-v 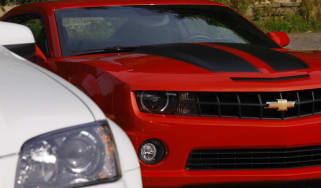 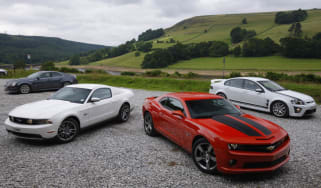 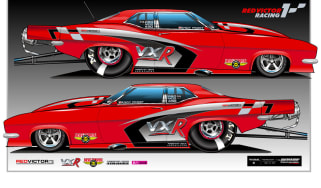 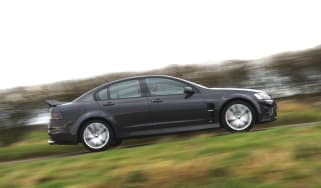 The charismatic Vauxhall VXR8 has gone, and it's one hard act to follow
Visit/vauxhall/vxr8/10101/vauxhall-vxr8-bathhurst-s 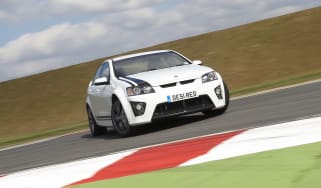 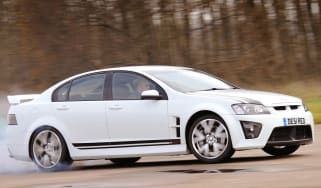 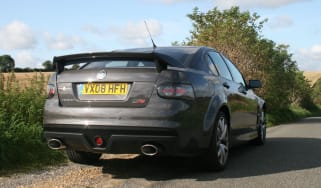 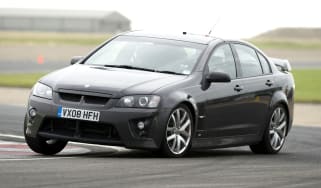 If you can live with the VXR8's spiteful fuel consumption, it's a lot of fun to be in
Visit/vauxhall/vxr8/9434/vauxhall-vxr8 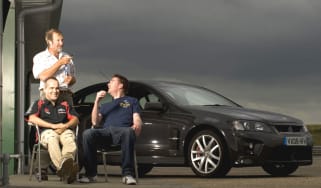 Richard Porter, keeper of the VXR8, has his driving assessed alongside another Vauxhall driver, a certain Mr Giovanardi…
Visit/vauxhall/vxr8/9309/vauxhall-vxr8 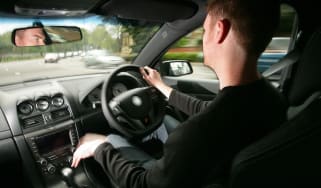 A clonking noise from the underside was a worry, and the fuel consumption continues to be hurtful
Visit/vauxhall/vxr8/9238/vauxhall-vxr8 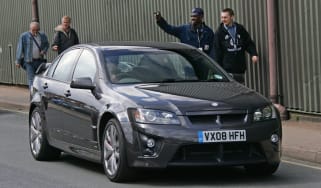