Richard Porter, keeper of the VXR8, has his driving assessed alongside another Vauxhall driver, a certain Mr Giovanardi… 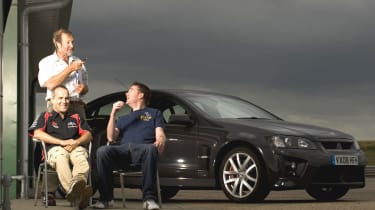 Everyone thinks they’re a good driver, don’t they? You’d no more catch the average man admitting to below-par skills in a car than you would catch them striding purposefully into a pub shouting, ‘Just a half of shandy for me. You know how easily I get drunk because I have an utterly microscopic gentleman’s area.’

But what if you were actually asked to demonstrate what sort of driver you were? It’s a bit of a throat- tightening moment. And that’s exactly what happened when someone at VX Racing, Vauxhall’s Touring Car team, decided it would be a wizard jape if I spent the day with their driver, Fabrizio Giovanardi, in evo’s VXR8 with an independent adjudicator along for the ride to assess our relative abilities on road and track.

On the road, however, there’s an outside chance that I can claw back some dignity on the basis that Giovanardi is both Italian and a racing driver. Ergo, he’s going to be edgy and impatient and I will embarrass him with my well-practised ability to sometimes let people out of junctions.

Our impartial observer for the day is driving guru and all round top chap Mark Hales. So, let the competition begin with a spot of road driving.

Hales wants to see how we cope on an unfamiliar road, driving as if we’re ‘late for an important meeting’. Right then. I have another advantage here because I’m very familiar with the car whereas Giovanardi has only driven a VXR8 once before and – judging from his superbly insouciant shrug as he imparts this info – he didn’t much care for it. I know that the big Vauxhall needs grabbing firmly with both hands to get the most out of it on roads like the twisting, turning one across the East Midlands that Hales has selected. At the same time, I’m conscious of not over-driving the car, not trying too hard and making a catastrophic mistake. ‘Welcome to the latest round of the British Touring Car Championship and I’m afraid Fabrizio Giovanardi isn’t here this weekend because last Thursday some clot from evo crashed him into a field of sprouts.’

This is, quite frankly, nerve-wracking stuff. But Hales is a clever assessor, gently engaging you in conversation as you drive, thereby getting you to relax and, as a result, to show your true hand. Cunning swine. I make a bit of a mess of one corner, but overall I think it went OK. So then, Fabrizio, make me look good here. Drive fast but ragged, lose patience with slower drivers, shout utterly vile things in Italian at anyone who dares to block your frankly dangerous progress…

This does not happen. Giovanardi is in fact utterly calm and assured. The easiest way to sum up his driving style is that it’s utterly… normal. And I don’t mean that as an insult. He’s just a fine, brisk, sensible road driver. Damn.

Actually, what’s more interesting is just how little Giovanardi cares about driving on the road. Back home in Italy – he still lives there and jets in for BTCC races – Mrs Giovanardi does most of the driving because Fabrizio, well, he just can’t be arsed. Naturally he has a couple of GM cars that come with his current job, but he also lets slip that if he has to drive around his neck of the woods near Modena he’s happiest in his utterly gutless nu-skool Fiat 500 1.2. The semi-auto one. This is classic racing driver behaviour. When Alonso was first at Renault, his company car, by choice, was a diesel Mégane. When Damon Hill retired he decided that an Audi TT was the best sports car for him. In other words, most racing drivers do not like road cars and Giovanardi is no exception. But, annoyingly for me, that doesn’t mean that he’s not very decent at driving on the road. He just doesn’t enjoy it very much.

So, to the track. Or rather, to the foregone conclusion. I hack my way around the unfamiliar Bedford Autodrome South Circuit, being generally cack-handed and lumpen, then Fabrizio takes me out for some hot laps and shows me the way it should be done. Which is to say, fast, fluent, taking the car by the scruff and yet appearing utterly calm and relaxed behind the wheel. There’s just one problem and it’s the VXR8 itself. On the one hand, for a big saloon you can chuck it around on the track and it seems to grip very well. But there’s a horrible feeling that the car really isn’t enjoying it and after not very many laps this begins to manifest itself mechanically and electronically.

I mentioned last month that there was some worrying banging from the front suspension, and that seemed to get worse after a circuit workout, being joining by a faint whining when you turned on some lock. Then the climate control went into some sort of fail-safe mode and completely shut down. Most worryingly, the axle tramp you get under hard acceleration and the rear-end judder you get under firm braking on the road clearly isn’t entirely the result of wide tyres struggling to maintain a full contact patch on bumpy tarmac, because these unsettling characteristics were extremely prevalent on the smooth surfaces of the Autodrome too. After three flying laps behind the wheel Fabrizio pulls a face. ‘We stop now,’ he says evenly. ‘Or I think we might break your car.’

This is not brilliant. I’m disappointed the VXR8 didn’t take track work in its stride in the way you’d hope from a car that ought to be built Outback Tough. With the suspension bangs and thumps worse than ever I booked the car in at a dealer. Then a few days before its appointment it developed another fault when the cruise control packed up.

A few hours after dropping the car off at Browns of Laughton they rang to report that the cruise worked fine for them – and weirdly it’s been working fine for me ever since too – and that they could find no problems with the suspension. Really? Yes, they said, but head office had issued an ‘advisory note’ on VXR8s that recommends the replacement of the engine mounts and the anti-roll-bar bushes. Right, so there sort of is something wrong.

The car will go back to have the new bits fitted as soon as they arrive from Australia. Hopefully the work will sort out the noises even if I reckon it won’t make the car any more at ease on track. Nor, I suspect, will it persuade Fabrizio Giovanardi to like it. Which is a shame because, despite the problems, I still deeply, deeply love this car.

The experts viewOn the road, Richard was immediately up to speed, as you would be in a car you know intimately. Very careful with the controls, very smooth with the steering and gears. You got the slight sense that he might go a little faster than was wise on a road he didn’t know, but that he knew the car’s big tyres and brakes would be there to rescue him. Which is probably no more than the rest of us do.

Fabrizio’s body language was different. He sat more slumped in the car, arms more sharply bent. He was less busy with the controls, but fumbled a bit with the gearstick on his left (even his race car is left-hand drive) until he did the sensible thing and left it in a higher gear and let the big engine do the work.

Then you noticed his steering inputs. His arms moved from the shoulder in a bigger, lazier sweep. The steering process started earlier and was more measured, and his eyes seemed to be fixed on a point much further ahead. Only once did a blind, tight corner come as a surprise, at which point he immediately turned into a racer, balancing steering against brakes, sorting it all out smoothly.

On track, Richard was immediately fast, and more important, still smooth, but he tended to negotiate the corner in a series of segments. Brake, then downshift, then add the lock, then get on the gas, then take off the lock. Not in a jerky fashion, but it didn’t string the corner together and make the car flow through it. There was a simple need to plan ahead – something that Richard admitted he found hard to do.

With Fabrizio it was once again the economy of effort that was noticeable. He used much more tarmac, his gaze flickering between the apex and a point somewhere between the exit kerb and the next turn, way off in the distance. Now there was a feeling that the car was rotating about its mid-point, rather than leaning on a front-end that was making ever louder protest.

I’d be happy to lend either driver a car that I owned, though. Both were extremely competent – and safe. One had simply studied the game and moved it to a higher level to suit his chosen profession. Mark Hales