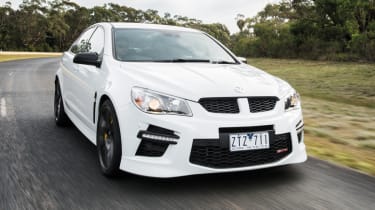 The new HSV Gen-F GTS, or Vauxhall VXR8 GTS, as it will be known in the UK. It’s a sports saloon that doesn’t possess a glamorous badge which aims to give a bloody nose to those that do. Namely the BMW M5, Jaguar XFR-S and Mercedes E63 AMG. Priced from £54,999, it undercuts each of them by around £20,000.

Under the VXR8’s vast bonnet lies a 6.2-litre, GM LSA engine, as also seen in the Cadillac CTS-V and Chevrolet Camaro ZL1. Fitted with an Eaton four-lobe supercharger and water-to-air chargecooling, it’s a monster. Throttle response is strong, overtaking punch relentless and the supercharger integration seamless. Of course, those 576 horses are required to move 1881kg at a meaningful pace, and indeed the VXR8 never feels anything less than supremely rapid – even compared to an M5 or E63 AMG (non-S), neither of which are as powerful.

The new VXR8 comes with standard-fit torque vectoring, Magnetic Ride Control, automatic parking, a head-up display, electronic power steering and a multi-way ‘Driver Preference Dial’ that adjusts the traction and stability control, steering weight, launch control and the ride and damping. Add a supercharged 576bhp V8 engine (up from the 425bhp of the previous, naturally aspirated model) and things get really interesting.

The third-generation Magnetic Ride Control (pioneered by GM) has three settings, Touring, Sport and Track. The softest of these, Touring, offers good ride comfort and body control. The Driver Preference Dial, meanwhile, has four modes, Touring, Sport, Performance and Track. Twist it to Sport and the traction and stability controls remain on, with torque vectoring off, while the steering and magnetic ride firm up. There’s very little difference between Touring and Sport, although Sport soon becomes my default setting for this test due to its slightly better body control.

Selecting Performance loosens the ESC and TC, and enables torque vectoring, but keeps the steering and ride in Sport (are you keeping up?). On the road you can sense a tightening of line as the vectoring comes into play and torque is redistributed (by braking the inside wheel), but only if you drive through the corner on the throttle – TV doesn’t work off-throttle.

Find a used Vauxhall VXR8 GTS for sale on the Classic and Performance Car site What’s it like to drive?

The torque transfer from the inside to the outside wheel is noticeable, but the effect is rather odd and, it has to be said, perhaps even unnecessary. With 576bhp and 550lb ft, the VXR8 has enough power and torque to allow the driver to tighten the line with a carefully metered right foot and a dash of oversteer. The big problem is that you can’t disable TV when in Performance or Track. That’s a real shame, as the added suspension sharpness and steering weight of those modes would work nicely with a more natural distribution of torque across the rear axle.

Speaking of steering, the VXR8’s helm is direct but rather numb – and once again it seems like feel has been mistaken for weight, particularly in Sport mode. Like the torque vectoring, the steering mode cannot be decoupled from the other settings, which is a shame – it would be nice to have the option.

The VXR8 offers better-than-expected traction and lateral grip from its Continental tyres (255/35 R20 front and 275/35 R20 rear). Test driver and former V8 Supercar racer Cameron McConville told evo that the Contis, custom-tuned to the VXR8, were one second faster over a lap around Holden’s test track and ‘far superior overall’ to other brands during development tests.

Oversteer is always an option, but perhaps more impressive is the VXR8’s reluctance to understeer – even in Touring or Sport when the understeer-cancelling TV is deactivated. You feel the VXR8’s 1881kg kerb weight, and roads with multiple compressions tend to over-agitate and overwork the magnetic ride into a series of minor-though-noticeable pitch movements, but overall the VXR8 is an inherently well balanced, stable and enjoyable car to hustle. It will be fascinating to see how it behaves on compression-filled UK roads.

One major perk the VXR8 has over its rivals is a six-speed manual gearbox – and it has a neat, effective and short-ish shift, too. Heel-and-toeing is simple, and mastering a manual ’box mated to a rear-drive saloon is a rare joy these days. The six-speed automatic is less impressive: shifts aren’t particularly fast, there are no steering-wheel paddles, and while it offers relaxed cruising, the auto never feels anything other than reluctant.

The obvious rivals are the aforementioned M5 and E63, but the VXR8 is actually closer to a C63 AMG or Audi S6 on price. A market curio then, with as many flaws as qualities. Once the first cars arrive in the UK later this year, a group test is undoubtedly in order. It might just spring a surprise.

The VXR8 is more enjoyable than I expected. It desperately needs a mix-and-match mode to allow a more driver-tailored set-up, but it’s fun and fast, and it’ll also be rare. The £54,999 cost will shock, even if you now get over £20k of spec as standard for £5k more than the price of the old model. Vauxhall is expecting UK sales of around 25-30 cars per year.

The supercharged and truly overpowered Monaro VXR 500, of which just 20 were built, is now perhaps the most valuable of all Monaros: in the region of £15-20k if you can find one.

The four-door VXR8 is much more up-to-date, but early 6-litre models are now starting to drop below the magic £10k marker. Better specced and more powerful 6.2 LS3 versions start at £17,000, but you can still pay anywhere up to £35k depending on age and mileage.

Given the choice, we’d opt for a late-spec post-facelift Monaro, either in VXR or basic V8 form. Or you could go the full Australian and buy one of the rare UK-spec Maloo pickups…