The most charismatic super saloon on sale 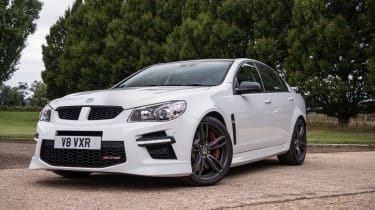 The VXR8 GTS Auto is the latest version of Vauxhall’s charismatic VXR8 super saloon, now available with an automatic gearbox. Born and bred in Australia as the Holden HSV GTS, but naturalised as a VXR8 GTS for the UK market, this is a perfect foil to the handful of German super saloons that are slowly converging towards a single form.

When we tested the VXR8 against the likes of the BMW M5 and Mercedes E63 AMG back in issue 208, we loved its sense of fun and charm. Given that its six-speed manual gearbox, in a sea of self-shifters, was one of the reasons we loved it so it seems strange to celebrate the arrival of an automatic version. Nonetheless, the VXR8 does now hold a broader appeal for offering both auto and manual gearboxes.

Naturally, the VXR8 holds a different sort of appeal to the established German alternatives. It’s a much brasher, bolder super saloon and the cabin also falls a long way short of the competition. It’s unlikely to win over buyers who have become accustomed to European quality and image, but it offers tremendous value for money.

The engine is still a 6.2-litre supercharged V8, lifted unchanged from the Chevrolet Camaro ZL1. It’s a bonafide muscle car powerunit with 576bhp and 545lb ft of torque. That’s enough to launch the 1850kg car to 60mph in 4.2 seconds. Top speed is limited to 155mph.

The automatic gearbox is a six-speed torque converter – so not the ultra-modern twin-clutch type transmission that most of the VXR8’s German counterparts use. The driver can take control using either the steering wheel-mounted paddles or the lever in a sequential forward-for-downshift, backward-for-upshift manner.

The supercharger is an Eaton unit boosting at 9psi – 0.6bar – which can shift 1.9 litres of air per revolution, apparently. Drive is apportioned between the rear wheels via a limited-slip differential.

With two valves per cylinder the V8 is a sort of time honoured, proven engine rather than an ultra high-tech powerplant, but as we’ll find out that’s not necessarily a bad thing. 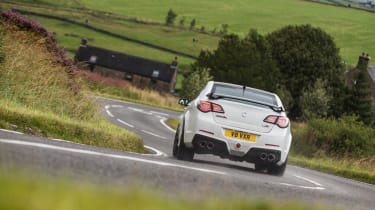 The technology in this car lies elsewhere. There’s a torque vectoring by braking system to help trim out understeer on turn in, magnetic dampers with a range of modes plus a raft of driver assistance technologies – Vauxhall lists Side Blind Spot Assist, Automatic Park Assist, Head Up Display and Lane Departure Warning among the VXR8’s tech features.

When we put the manual VXR8 GTS up against the best European super saloons in issue 208 we said of it, ‘The engine is a real monster and takes some commitment to pin all the way to the limiter, such is the scale of the performance. The brakes are powerful and absolutely loaded with feel.

‘Most impressive of all is that the chassis takes the forces exerted on it with real composure. Out of corners, the huge torque is put to good use and oversteer is resisted well beyond expectations. When it does arrive, it’s so easy to correct.

‘The magnetic dampers allow plenty of body movement but always support the car’s weight and allow it to change direction cleanly.’

That all applies to this version, too. Compared to the likes of the BMW M5 and Audi RS7, which are both resolutely locked into to the road surface, the VXR8 feels loose limbed and relaxed, but never to the point of being wayward and out of control. With so much grip and performance it also disguises its weight effectively, although when you do really sling it into a corner its 1850kgs do begin to show. 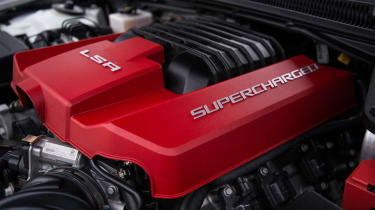 The engine is a brute. Being supercharged and not turbocharged, which is the more common way these days, the delivery builds in a linear fashion through the rev range. Rather thumping with its full force from 2000rpm the rate of acceleration builds progressively until, in the very upper reaches of the rev range, the performance becomes so intense that you must fight the urge to change up early.

The automatic gearbox is quiet and relaxed around town and in manual mode the shifts are reasonably quick – although there is a discernable delay between the shift actuation and the paddle being pulled. As result this gearbox lacks the immediacy of a modern twin-clutch unit.

However, being a more languid sort of super saloon that lack of intensity just isn’t a problem. With third gear running well into three figures the gearing is incredibly long, although that doesn’t do much to diminish the car’s straight-line performance. 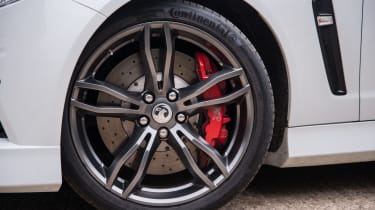 So the automatic gearbox works pretty well, but we’d still give it a miss. The VXR8 is just about the only super saloon that can be specified with a manual gearbox, so opting for the automatic version simply wipes out the car’s USP.

In terms of price the VXR8 is a match for the BMW M3 and Mercedes-AMG C63, both of which are down on power compared to the big Vauxhall – by 151bhp and 107bhp respectively. However, both of those rivals offer more modern powertrains and better quality cabins.

The VXR8’s party trick, though, is offering BMW M5 and Mercedes-AMG E63 S rivalling power with a £20,000 saving. In terms of bang for buck, the VXR8 GTS is unmatched in this class.

The most charismatic super saloon on sale. Majors on value and performance, but lacks the class of European rivals. Automatic option works well, but robs the VXR8 of its USP.

BMW’s next M3 to be available in manual or auto; with and without all-wheel drive
Visit/ferrari/ferrari-f8-spider