The charismatic Vauxhall VXR8 has gone, and it's one hard act to follow 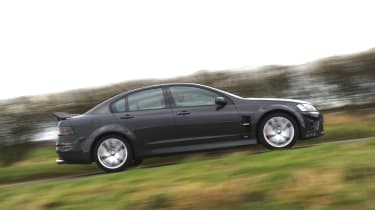 When the VXR8 first arrived at evo I poo-poohed the idea that it was an M5 for half the money. If you wanted an M5, I reckoned, you’d just buy an M5. And if you only had half the money, you’d scour Auto Trader until you found a second-hand one, because it’s not unreasonable to presume that polished and efficient perfection is what you’re after.

Yet what if you don’t want girly-swot faultlessness? A lot of us would prefer something ruder and lewder instead, and if it’s rude and lewd you want, the VXR8 is your sort of car. In fact, it neatly defines why sometimes actual ability can be second to rough-diamond character and the way a car can simply make you smile.

Certainly, some elements of the big Vauxhall just seem a bit sloppy, as if the designers hadn’t really thought them through. A couple – the seat-belt warning that starts bonging every bloody time you turn on the ignition, or temperature controls that, even after six months, you can still confuse with the stereo volume – were minor quibbles. The relative crudeness of the chassis was a slightly bigger one, especially since our car didn’t react well to a relentless pounding from shabby London speed bumps and developed a series of worrying clonks from somewhere under its hull.

Not that these seemed to affect the way the suspension worked, which was always, as driving guru Mark Hales put it after a brief drive on track, ‘a bit vintage’. Chief problem seemed to be the loose feeling from the rear axle, causing it to tramp like an old Capri under hard acceleration and – more alarmingly – judder and shiver under heavy braking, as if the tyres were gripping too hard and almost pulling all the rear ironmongery clean off.

So you’d think that the longer you lived with the car, the more this would frustrate and irritate. Actually it just became part of its character, a funny little habit that you could largely learn to work around, knowing that as long as you kept the jittery back end under control the VXR8 could be chucked around with abandon. Sometimes little flaws can be fun, especially when they’re shouted into submission by a 6-litre V8. Obviously that came with its own vice, a mighty hunger for petrol, but even that was forgiven because of the noise and the power you got in return. And the freer-breathing Walkinshaw Performance exhaust we put on our car gave more of both, without knackering the Vauxhall’s ability to cruise quietly and comfortably.

Which actually it could do rather well, because despite having a chassis that even Australians might call unsophisticated, the VXR8 was also a surprisingly practical and useable car with terrific seats, a superb driving position and the ability to cruise gently through city traffic. But it was on decent country roads where it really came alive, V8 thunder goading you into working the hefty gearshift and hauling on the man-size steering wheel, rampaging through corners and then hollering up the next straight.

The VXR8 wasn’t perfect, and after half a year I’m still certain it’s for people who want a modern muscle-car and not a BMW M5, but it was charming and entertaining and I don’t think there was a single journey during which the big V8 that’s at the heart of its appeal didn’t make me smile. Chassis clonking aside, the thinly disguised Holden felt strong too. It didn’t even use any oil.

If there’s still anyone left in Britain with 36 grand to spend on a vastly charismatic fast four-door saloon who really doesn’t want a second-hand Bee-Em, I reckon if they could learn to stop worrying about petrol prices they could learn to fall in love with a VXR8.

Although I should point out that other sports saloons are available for that money, and one of them is my replacement for the Vauxhall, the Evo X FQ-360 that Ollie Marriage introduced in the last issue. This is interesting, because three of my favourite things about the VXR8 were its wonderful exhaust note, its subtly swelling power delivery and its extremely comfortable interior. Oh, and its sheer charm. And the Mitsubishi appears to have none of those. It’s got one hell of an endearing act to follow.