If you can live with the VXR8's spiteful fuel consumption, it's a lot of fun to be in 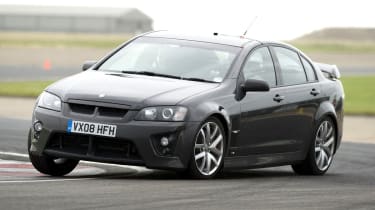 Look closely at the front fogs and rear lamps of the Vauxhall and you’ll see the logo of the company that really built it. Not Holden, but HSV, a company at least as autonomous as AMG is to Mercedes.

HSV has its own designers and engineers, and they were in at the start when Holden began designing the new Commodore on which this car is based. This allowed them to get busy with defining their own suspension settings and engine tune, while they also decided to drop a serious sack of their own cash on new bumpers, side gills and unique, expensively homologated LED rear lamps.

For economies of scale, as much of the HSV R8 (as it’s really called) is built on the regular Commodore line, but its fat tyres won’t fit down the guides on the assembly track and its front valance is too deep to make it off the ramp at the end. So each HSV car leaves the building wearing unpainted boggo Commodore bumpers and skinny taxi-spec wheels. It’s then shipped down to HSV’s own factory, also in Melbourne, where the proper trimmings are fitted.

It’s a complicated build process and one that, for VXR8s, is then followed by a very long boat journey, but as far as I’m concerned it’s worth it.