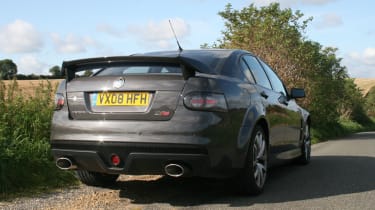 Not long after our Vauxhall arrived last May I took it to an open day at Walkinshaw Performance, British branch office of Holden Special Vehicles (the Aussie firm that builds the VXR8) and supplier of factory-approved tasty tweaks. The range of stuff you can have fitted is excitingly massive and I started dreaming wistfully of superchargers, adjustable suspension kits, quick-shifters and louder exhausts.

But then after a few weeks with the car I stopped being so keen to mess with the basics. It’s rare that I find myself thinking the VXR really should be faster; the handling is fine, aligned with a happy ride quality that I don’t want to destroy; the gearchange has loosened up beautifully with miles. So there seemed less and less point to fitting a blower, new chassis bits and the short shifter. Only a new exhaust still appealed, just to unleash a little more V8 thunder.

No one is going to get into your standard burbling VXR8 and think, ‘Wow, is this one of those new diesel hybrids I’ve been reading about? Did you borrow it off Polly Toynbee?’ Nonetheless, a bit more shock and awe wouldn’t go amiss. So last week I went back to Walkinshaw to get some new pipes put on. I was actually holding out for their new ‘bi-modal’ system, which lets you switch between loudness settings (hopefully marked with a Spinal Tap-ish 11), but it’s not ready yet so I’ve settled for what they call the ‘Performance’ system, as opposed to the truly thunderous ‘Supercar V8’ set-up that a very senior GM blokey warned me was ‘too loud’ for everyday use.

And I’m happy to report that the result is rather excellent. At first I thought it sounded much the same, only with the bass turned up a touch. But then I started to appreciate the gentle popping on the over-run and the more hammering note at higher revs. All of which happens without being so intrusive that it causes bits of my brain to fall off.

The real genius of the new exhaust, however, is the way it affects the engine’s delivery as well as its sound. For a big and pretty low-tech V8, the Vauxhall’s LS2 engine has always spun reasonably well – certainly better than Ford’s equivalent American V8 – but the new pipes really seem to help its breathing, loosening its chest and adding a smooth urgency to the way it builds revs. They claim a power gain of up to 30bhp, but in truth I suspect it’s as much the cleaner, more consistent delivery that makes the VXR8 feel faster and fitter than ever.