Our first driving impressions of the new Vauxhall VXR8, now available with an Auto and MRC dampers 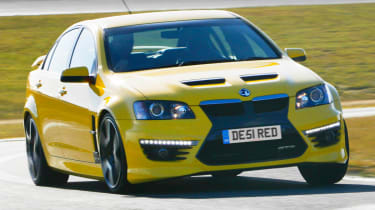 We are finally getting the Magnetic Ride Control dampers in the UK. These dampers, like the ones in Ferraris and Audis, use a fluid that has iron particles in and can be made firmer or slacker at the flick of a switch.

For the first time in the UK, the VXR8 will be available with an automatic gearbox. There are no paddles or claims of particularly swift shift times from the conventional torque converter but it works well. When you knock the gearstick across into its manual selector mode it is pleasingly intuitive in that you push away for down and pull back for up. However, performance with the Auto ‘box did seem slightly dulled compared to the manual so we would still stick with that out of choice.

The MRC dampers work well. There isn’t an obvious tensing of the chassis when you switch between Performance and Track modes. The Track name makes it sound as though it might be unbearably firm, but in fact it still rides accommodatingly enough that you can leave it switched in all the time if you want.

The VXR8’s steering is still the most impressive thing, as its lightness and precision make the big saloon feel much more nimble than you would imagine. I should also mention that it is one of the most fun cars I know for indulging in glorious power oversteer.

Well, it will be available not only in saloon but also estate and Maloo (a low slung pick up) variants, which makes it pretty unique. Two specs will be offered: a basic Clubsport at £45,000 and the GTS model at £49,500.  It seems dangerously close to BMW M3 and Merc C63 AMG money, but in reality this is a car that, in size at least, should be considered alongside the significantly more expensive Jaguar XFR and Merecedes E63 AMG.

The new car now has EDI (Enhanced Driver Interface), which is essentially like a slightly less complicated version of the information display in a Nissan GTR. Its screen allows you to monitor things such as torque and power usage, G-forces or lap times.