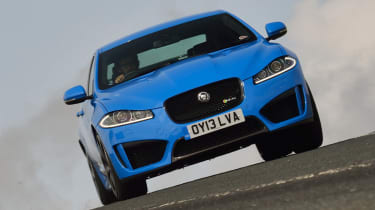 The Jaguar XFR-S is the British company’s fastest ever sports saloon, and a harder cored version of the XFR which has rivalled the BMW M5, Mercedes E63 AMG and Porsche Panamera since 2009. Like its XKR-S stablemate, it uses a 542bhp supercharged V8 engine and its top speed is an electronically limited 186mph. Prices start at £79,995 – around £6000 more than a basic M5 and £15,000 more than an XFR, which is 39bhp and 31mph down.Technical highlights?

All the shouty aerodynamic kit – the new splitter, sills and Mitsubishi Evo-like rear spoiler (which you can choose to downgrade, if the styling is too shouty) – has an aerodynamic purpose, with Jaguar claiming a 68 per cent reduction in lift.

The wheels are half an inch wider at the front and an inch wider at the rear, and wear new P Zero tyres developed with Pirelli. Behind the six-spoke alloys lie the front suspension uprights from the XKR-S, revised knuckles and firmer springs all round, stiffer bushes at the rear, new wheel bearings at the front, revised damper settings, a recalibrated active differential and a steering valve taken from the F-type roadster.

As soon as you set off down the road, the chassis changes are palpable. First you notice the added weight and precision to the steering; it’s not alive with talkative feedback, but it’s beautifully direct and the big blue car feels easy to place as you guide it amongst the traffic. At low speeds the ride is noticeably firmer. It’s not uncomfortable because it remains well damped, but you can feel pimples and ruckles in the surface below you. Thankfully, though, as speed picks up, so the suspension smoothes the imperfections ever more seamlessly, and motorway journeys are as quiet and cosseted as they are in a standard XFR.

It’s clear within a couple of corners that the R-S is a much harder car to unstick than the R. Not in a bad way – it’s still perfectly possible to draw long black lines up a road out of a hairpin – but in the dry, you have to apply a lot more lateral load to get the tread blocks to relinquish their hold.

When the rear does step out of line, it does so more smartly than before, but the steering’s so quick and accurate that it’s easy to catch, and if you want to continue the slide then the electronically controlled diff now seems to remain locked up much more tightly and satisfyingly. It’s not all about the rear end, though. It’s startling how much grip the R-S’s front end has, and the alacrity with which you can throw the car’s considerable mass one way then another is enough to put serious strain on your neck. Though while the Jag might have found a chunk more grip in the dry (30 per cent, according to the spec sheet), in the wet it is as much of a lairy challenge as ever and the car will oversteer for Britain if you let it.

For a full review of the Jaguar XFR-S – on some of Brtiain’s greatest (though lesser celebrated) roads, pick up a copy of evo issue 187 – on sale now. Buy yours here.

Oh, and keep your fingers crossed for an XFR-S Sportbrake. The Mercedes E63 AMG could do with a super estate rival…