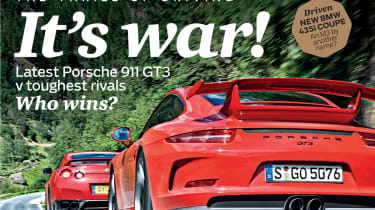 Buy a copy of evo 187 in our online shop

News Getting under the skin of Jaguar’s latest F-type concept (there’s no roof or windows, so it’s pretty easy)First drivesNissan 370Z, Maserati Ghibli, Kia Proceed GT, Porsche Panamera 4S and a host of other new cars get the evo once-over ColumnsPorter’s bought a car for his dog. She’s only got a provisional licence LettersAssemble seven stunning supercars in one location and you’re bound to get a reaction. Our postman is currently being treated for RSI

911 GT3: Its toughest testSave your ‘2013 evo Car of the Year’ jibes for now; some dramatic changes to its make-up mean the new 991 GT3 loses its traditional automatic favourite status. We suss it out via its main rival, a superlative predecessor and a bona-fide supercar that’s twice its price. GT-R, 997 GT3 RS 4.0 and 12C: bring it on Why we bought 911sNick Trott, Richard Meaden and Jethro Bovingdon all own Porsche 911s of varying ages and descriptions. A thrash of all three reveals why they invested their hard-earned

Alpine adventureThe Alpine name returns to a sports car in two years’ time thanks to a link-up with Caterham. We look at its four forebears to see what heritage it must live up toCaterham 620RThe Caterham R500 is dead. Long live the 620R, with its Veyron and McLaren F1-busting power-to-weight ratio. We drive it£4000 heroesFive performance car greats, each and every one of them cheaper to buy today than the Ferrari 458’s optional golf bagJaguar XFR-SEighty thousand pounds, 542bhp and a flipping big wing: the Jaguar XFR eschews its normal shrinking violet status for an all-out assault on the BMW M5

Buy a copy of evo 187 in our online shop