With its 503bhp, 5-litre supercharged V8, the XFR is Jaguar’s most powerful saloon ever 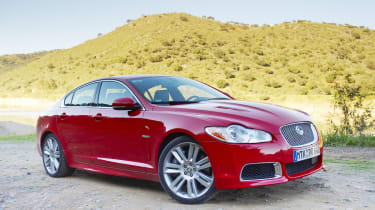 XF plus R equals Jaguar’s M5, right? Think again. The product of talented, softly spoken engineers wielding big sticks and entrusted with preserving the special, multi-faceted magic synonymous with the brand, Jaguar’s fastest ever saloon was never going to be so obvious. Instead – and to satisfy the disparate demands of the brief – it would have to be both aggressive and reserved, overtly powerful yet gracefully understated, less flash than a BMW but more fascinating than a Merc. It had to be so much more than the old cliché of a thug in a Savile Row suit.

Even by Jaguar’s standards, this is the saloon that has it all – including a mighty, all-new supercharged 5-litre V8 engine with power and torque outputs that singe the paper on which they’re printed, continuously variable damping and a trick electronic differential. But to look at it, well, you’d hardly guess. Yes, there are visual cues: the deeper bumpers, extra ducts and vents, 20in wheels, four exhaust pipes and more pronounced sills, but they provide surprisingly slim differentiation from the (now dropped) 4.2-litre SV8 and, if you don’t like the way the XF looks, the XFR is unlikely to change your mind. If you value stealth above conspicuous steroidal enhancement, though – and it’s a sure, clinic-trialled bet that Jaguar’s customers do – then the low-key approach will be welcome.

This, at any rate, is the distillation of some notebook musings, jotted down as I leafed through the XFR press pack at 38,000 feet on the way to Spain. And perhaps their slightly negative tilt isn’t so surprising given that it had been just a few days since I drove Maserati’s new Quattroporte Sport GTS (see p92). If ever a big saloon knew how to layer a sporting aesthetic with style and flair, that was the one. Going by the pictures, the Jag’s visual mojo looked both perfunctory and polite by comparison. But preconceptions can be so very misleading.

It’s sunny in Seville as I walk towards the glossy red XFR allocated to evo for the day, and the in-the-metal reality is somewhat at odds with the two-dimensional image in photos. It looks stockier than the regular XF; less like a Lexus GS430, more like a predator incognito. Similarly, on the inside understatement trumps spotlit machismo, but the contrast between the dark wood and aluminium trim adds subtle drama, while the deeply bolstered new seats drop a strong hint that the g-forces experienced in the cabin will be more comprehensively engaging. The alliance of good taste and propulsive potential is well expressed.

For company and navigational assistance I’ve got Jaguar’s Russ Varney, chief programme engineer for the new XKR I’ll be driving later (see p50), and, of course, a brand new supercharged 5-litre V8 developing 503bhp and 461lb ft of torque. And the first thing that’s obvious to both of us as we trickle out into Seville’s morning rush hour and head for the motorway is how hushed and comfortable the XFR is. I haven’t yet pressed any of the buttons that will reveal its wilder side but, for now, it would be impossible to say with conviction that the XFR is louder or harder-riding than the old SV8. Maybe it’s even quieter due to the absence of supercharger whine – the engine’s new Eaton ‘Twin Vortex’ supercharger has four lobes per rotor instead of three, which soaks up less energy to drive it and reduces its sonic contribution.

I confess to Varney that this level of hush and smoothness is a bit eerie in a car Jaguar claims will bite chunks out of Audi’s 572bhp RS6, never mind a BMW M5. Some straight-line stats: with a 0-60mph time of 4.7sec and 100mph dispatched barely five seconds later, the XFR is every bit as accelerative as an M5 from a standing start and, once rolling, its overtaking ability is little short of devastating, its claimed 1.9sec 50-70mph time taking just under a second out of the RS6.

Varney admits there was quite a heated debate over what level to set the soundtrack at (and promises I’ll hear more of it when I get the opportunity to exercise my right foot) but in the end it was decided to click it back a few notches for the XFR and leave it a little more open-mouthed in the identically engined XKR. One thing never in dispute, though, was that driveability should take precedence over gratuitous displays of outright grunt. ‘Having lots of torque available at low to medium revs is more compatible with the way most people actually drive,’ says Varney, ‘and this engine’s peak torque runs all the way from 2500 to 5500 revs. Instant urge is more useful than frenetic energy at eye-watering revs.’ Not necessarily what I want to hear as we dribble to a halt behind yet another smelly, dust-caked truck.

The six-speed ZF automatic transmission is doing its bit to soothe our progress through town, sliding imperceptibly between ratios in fully auto mode, though when we hit the open road and bring the steering-wheel paddles into play, it promises best-ever shift speeds and, with its locking torque converter, a new level of responsiveness.

An hour later we’ve shaken clear of the traffic and entered a comparatively surreal world of beautifully engineered roads with paper-smooth surfaces, exquisite constant-radius curves and wide-open sight lines. And we’re moving. John Barker will shed more light on this back in Blighty, but as the XFR effortlessly rips through the rugged landscape, it strikes me that Jaguar may yet have created the perfect foil to the M5’s maximum attack, all-bases-covered way of doing things. All of its 503bhp and 461lb ft are accessible and useable. Toe to the floor, the XFR feels almost shockingly rapid, the previously subdued, soft-edged V8 burble acquiring a nape-tingling edge and resonant bellow as the acceleration starts to bury my spine into the barely yielding backrest. Meanwhile, the six-speed auto trades absolutely none of its sublime smoothness for electrifying shift speeds at maximum chat, which is just what you need when you’re calling the shots via the soft-touch shifters behind the wheel’s horizontal spokes.

The faster we travel, the more remarkable the chassis becomes. The XF SV8 had two-stage dampers with a soft and a firm setting. The new system on the XFR is continuously variable between those two extremes. Accelerometers measure vertical acceleration front and rear, lateral acceleration, whether the car is accelerating or braking and the steering-wheel angle, and the damper settings are then adapted to the conditions. Also new is the electronic differential, which can divert torque to the outside rear wheel if the tail begins to slide instead of relying on the electronic stability system to brake the inside rear wheel. Its effective operating range is from completely open to 90 per cent locked.

And whereas the SV8’s chassis felt safe, pliant and progressive, the XFR’s, with its quicker steering, 30 per cent stiffer spring rates, continuously variable damping and electronic diff, is significantly sharper and quicker witted. It can be placed with pinpoint accuracy and turns in with a lightness of touch unprecedented in a car of its size and weight, locking onto the apex of even the tightest bends with minimal coercion from the helm.

The chassis clearly has the compass and traction to deploy its heavy-duty outputs safely, but more remarkable is the deft line it treads between loose-limbed suppleness and iron-fisted body control. You’re never aware of the body falling outside a very tightly prescribed range of movement, though the same can’t be said for the rear wheels if you’re in the mood. Varney explains that the button labelled ‘Dynamic’ on the centre console allows the car to yaw a little more when leaned on, but still with a safety net, while if you hold the DSC button down for 10 seconds you can turn the system right off and let the combination of right foot, right gear and e-diff push the tail progressively wide.

Towards the end of our drive, though, there’s a miraculously straight stretch of road. So straight it spears right into the rippling heat haze of the horizon. No traffic. The temptation’s too much. We drop two cogs and surf the tsunami of torque to unmentionable figures in a handful of heartbeats. The thrust is savage but, at the same time, oddly civilised, as if the two sides of the Jaguar’s dual personality are competing for the glory.

Maybe raw performance isn’t the issue. If Jaguar had wanted to make an XF with the firepower and decibel output to obliterate all the German opposition, there is apparently the scope in the engine design to do just that. But maybe not, for the time being, in the ZF transmission. The XFR’s almost casual, cool, undemonstrative style takes some adjusting to, but it could make the competition, particularly the M5, seem like desperate over-achievers. Like they say, it’s always the quiet ones. 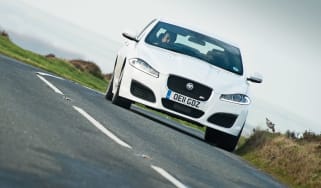 Jaguar's 503bhp supercharged M5-worrier can now be had for as little as £20k. Tempted? Here's what you need to know
Visit/news/evonews/292819/jlr_launches_ingenium_engine_family.html 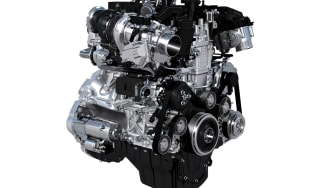 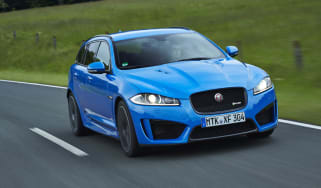 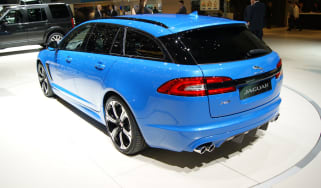 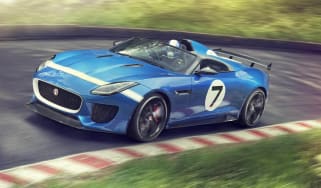 The Jaguar F-type Project 7 is a one-off single-seater F-type, which made its debut at Goodwood. Here's a new video explaining how the project materia…
Visit/jaguar/xfr/13470/jaguar-c-x17-suv-concept-pics-and-video-frankfurt-motor-show-2013 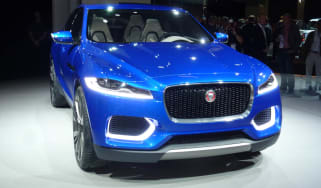 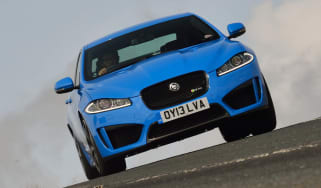 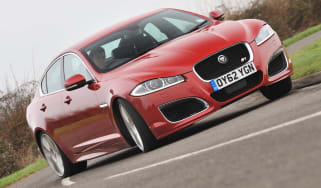 We review the new 174mph Jaguar XFR Speed Pack. Is the faster options pack worth spending your money on?
Visit/jaguar/xfr/12867/jaguar-xfr-s-video 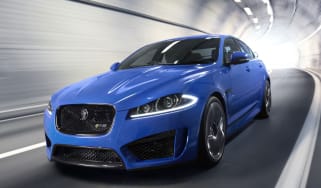 Jaguar has released a video showing the new 542bhp XFR-S being driven very quickly, and slightly sideways, in the mountains. Watch it here...
Visit/jaguar/xfr/12856/la-show-jaguar-xfr-s 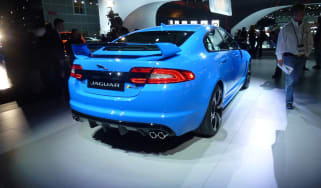 The Jaguar XFR-S has been officially unveiled at the 2012 LA motor show, with the highlights including 542bhp and a 186mph top speed
Advertisement
Visit/news/evonews/287248/2012_los_angeles_motor_show_az.html 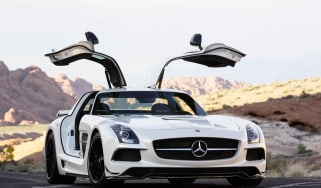 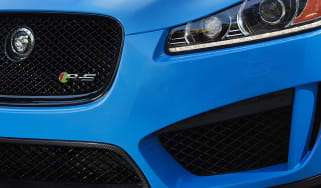 Jaguar has released an image of the XFR-S, and has confirmed that it will be fully revealed at the Los Angeles motor show
Advertisement
Visit/jaguar/xfr/12718/jaguar-xfr-speed-pack-priced 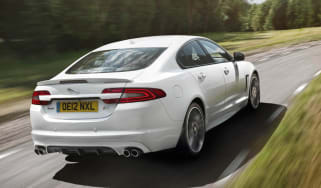 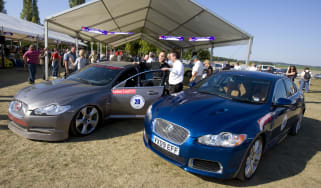 A weekend trip to France leaves our Jaguar XFR completely unfazed. It's the perfect vehicle for long hauls
Visit/jaguar/xfr/10836/jaguar-xfr-touring-car 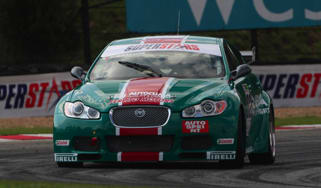 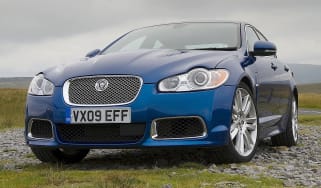 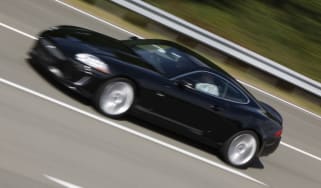 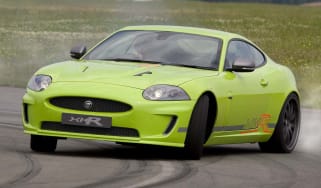 Jag XFR, the fastest Jaguar ever to make UK debut at the upcoming Festival of Speed
Visit/jaguar/xfr/9714/jaguar-xfr-225mph 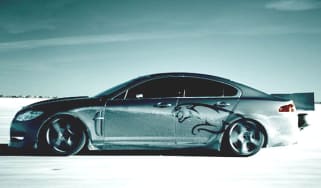