Jaguar's 503bhp supercharged M5-worrier can now be had for as little as £20k. Tempted? Here's what you need to know 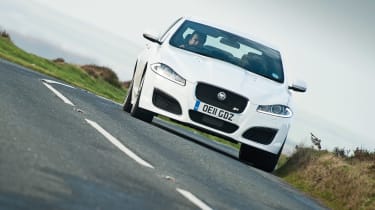 The XFR wasn’t the first supercharged XF, of course. The SV8, which appeared in the spring of 2008, was effectively a replacement for the old S-type R and had a slightly more powerful version of that car’s blown 4.2-litre V8 (410bhp, 413lb ft), enough for a 0-60mph time of 5.1sec. With the subtlest of body kits, it was a genuine Q-car. But the full-fat ‘R’ model was already on the way. Consequently the SV8 remains one of the rarest of all cats, and well worth seeking out today if you enjoy surprising BMW drivers.

The main event arrived just a year later, in April 2009. Jaguar’s fastest-ever saloon was designed to take on BMW’s omnipotent M5. It had a new 5-litre supercharged V8 (shared with the XKR coupe) developing 503bhp and 461lb ft of torque, the new Eaton ‘Twin Vortex’ charger being more efficient and less whiny than the old blower. It also had 30 per cent stiffer spring rates, continuously variable damping and a trick new electronic locking diff, though the gearbox was the familiar ZF six-speed auto with paddles. On the outside there was a bit more attitude – extra ducts and vents, deeper bumpers, four exhausts, handsome 20in wheels – but it was still pretty understated. Nothing understated about the way it went, though: we recorded 0-60mph in 4.8sec and 0-100mph in just over 10sec.

The spring of 2011 brought the launch of a special edition, the XFR 100 (because only 100 were made), with a swankier cabin, black exterior trim and dark grey 20in ‘Draco’ alloys with red brake calipers. More significant was the MY2013 round of upgrades, most notably the new eight-speed gearbox, while the optional ‘Speed Pack’ (£2750) raised the limited top speed from 155mph to 174mph, with a new front splitter and rear wing to aid high-speed stability. And in summer 2013, the 542bhp XFR-S came along with even wilder aero, a 0-60mph time cut to just 4.4sec, a top speed of 186mph and a stonking price tag of £80k.

We’re looking at the cheaper end with this guide. As with all forced-induction cars, the XFR has tank- and wallet-draining potential if you’re heavy of hoof, but right now a used example looks spectacular value. 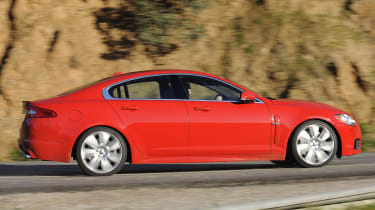 ‘Toe to the floor, the XFR feels almost shockingly rapid, the previously subdued, soft-edged V8 burble acquiring a nape-tingling edge and resonant bellow as the acceleration starts to bury my spine into the barely yielding backrest. Meanwhile, the six-speed auto trades none of its sublime smoothness for electrifying shift speeds at maximum chat, which is just what you need when you’re calling the shots via the soft-touch shifters behind the wheel’s horizontal spokes.

‘The faster we travel, the more remarkable the chassis becomes. The XF SV8 had two-stage dampers with a soft and a firm setting. The new system on the XFR is continuously variable between those two extremes. Also new is the electronic differential, which can divert torque to the outside rear wheel if the tail begins to slide…

‘Whereas the SV8’s chassis felt safe, pliant and progressive, the XFR’s, with its quicker steering and stiffer springs, is significantly sharper and quicker-witted. It can be placed with pinpoint accuracy and turns in with a lightness of touch unprecedented in a car of its size and weight.’ (evo 129) 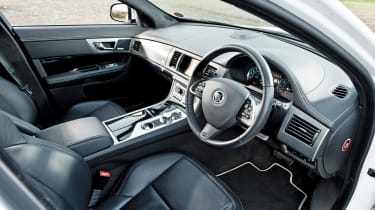 Garry Wilson - ‘In October 2012 I spotted a late 2009 XFR listed on Auto Trader. It was garaged with a full Jaguar service history and clearly well loved, so I bought it. It had 65k on the clock but I wasn’t worried about a high-mileage car.

‘I’ve done over 40,000 miles in it now and it’s comfortable and refined at any speed – though for some reason my wife finds the front passenger seat uncomfortable – and it’s an awesome cruiser, sitting quietly at 70mph doing 30mpg. The average is around 25mpg. The tank’s not huge, but I can get over 300 miles between fill-ups on a long run.

‘The performance is awesome and it can be real fun. The DSC perhaps intervenes too much when you’re pushing on, but the XFR is an animal in the wet without it. All that DSC action polished off the rear brakes pretty quickly, and it’s heavy on rear tyres too.

‘The first two services, both around £400, were at a Jaguar dealer because I took an extended warranty. I made one claim – rust was appearing on the bootlid – but this year I dropped the warranty because of the high miles and the small print being vague as to what Jag would cover. The good points of the car’s refined power far outweigh any issues and I’m now seriously considering an XFR-S Sportbrake.’

>Find Jaguar XFRs for sale on Classic and Performance Car