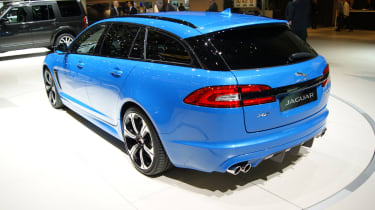 Jaguar has unveiled the the new XFR-S Sportbrake at the 2014 Geneva motor show. The estate model shares the same 542bhp supercharged V8 as the recently launched saloon, while offering improved luggage space.

Thanks to the power and 502lb ft of torque, the Jaguar is capable of a claimed 0-60mph time of 4.6secs and an electronically limited 186mph top speed. The external changes are effectively identical to the XFR-S saloon, but the aerodynamics have been specifically tweaked for the Sportbrake. The rear diffuser and roof-mounted spoiler have been added to reduce lift.

The car, like the rest of the V8 Jaguar range, is fitted with the eight-speed ZF ‘Quickshift’ automatic gearbox. There’s no manual option, although the steering wheel paddles should keep you entertained. Just like the saloon, you get an electronic diff, and stability control tweaked to manage the Sportbrake.

The Sportbrake will get a set of 20-inch ‘Varuna’ Forged alloy wheels – identical to the saloon’s – with a set of bespoke Pirelli P-Zero tyres. The suspension has been revised over and above the saloon, including a new rear anti-roll bar, to maintain a sharp turn-in while managing the extra weight at the rear of the car.

It’s the first time that the Jaguar R-S treatment has been applied to an estate car, with its sights firmly set on rivals like the C63 estate. Just like the German super-estate offerings from AMG and Audi, the XFR-S combines supercar-like performance with the ability to carry four passengers, or move large furniture. Jaguar claims an ample 1675 litres of rear load space when the seats are folded flat…

Priced from £82,495 in the UK, the XFR-S Sportbrake will be available to order in April.