It's day two of the Geneva motor show, and there's still many exciting to see. Keep track of the latest Geneva news and motor show videos here 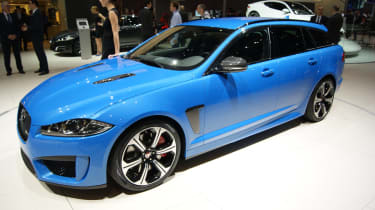 The 84th running of the Geneva Motor Show is under way, with some of the most exciting car already making a debut. Check back regularly for the latest Geneva news and unveilings, which will be going on throughout the next two days. This page will be updated regularly with the latest news and video content from the 2014 Geneva motor show

Alfa Romeo 4C Spider - the roadster version of the lightweight carbon fibre sportscar has been shown in concept form.

Audi TT and TTS - Audi has finally shown the new TT Coupe, whihc will go on sale towards the end of 2014.

Audi TT Quattro Sport Concept - A preview of what could be the next TT-RS, with no sign of that glorious five-pot TFSI engine in sight.

Bugatti Veyron Vitesse Rembrandt - Another special edition Bugatti Veyron, this is the fourth in the line of Bugatti Legends models.

Gumpert Explosion - Perhaps the best new car name of the show, this Audi based coupe boasts some serious performance

Jaguar XE - Our first look at the baby Jag saloon, which is set to rival the BME 3-Series and Mercedes C-Class in 2015.

Koenigsegg One:1 - Koenigsegg describes the One:1 as the world's first 'Megacar' due to its 1366hp power figure.

Lamborghini Huracan - Full technical details of the new baby Lambo have been spilled UPDATED WITH VIDEO.

McLaren 650S Spider - The new 650S loses its roof, with the new Spider version unveiled for the first time UPDATED WITH VIDEO.

Maserati Alfieri concept - A new coupe concept, based on the MC Stradale, to take on the Porsche 911 and Jaguar F-type Coupe.

Nissan Juke Nismo RS - This is a Juke for people who thought that the standard Nismo was a bit soft.

Vauxhall Astra VXR Extreme - The Astra VXR has a flash of Renault R26.R with this track-biassed special edition.

Volkswagen T-Roc concept - Based on Golf underpinnings, this new three-door soft-roader could take on the Nissan Juke.

Alfa has taken the new all-alloy engine from the 4C and bolted it into the Giulietta Cloverleaf, and the Mito Cloverleaf gets a new automatic gearbox, creating some new hot hatches.

Three new special edition Aston Martin models will be revealed at the Geneva motor shows, the DB9 Carbon Black and White, which adds new equipment and colour schemes to the DB9, while V8 Vantage N430 brings a touch of the GT3 race car to the Vantage model.

Audi’s smallest hatch is set to receive the Audi Sport treatment. Using the 2-litre engine from the S3, the S1 produces 230bhp powering all four wheels using a Haldex four-wheel drive system. Sharing its name with the marque’s legendary S1 quattro rally cars of the 80s, this hot hatch will no doubt be one of the focal points on Audi’s stand…

Take Audi’s four-wheel drive hot hatch and chop the roof off, and you’ve pretty much got the S3 cabriolet. It produces 296bhp and 280lb ft of torque thanks to being fitted with the same 2.0-litre TFSI engine as its hard top equivalent.

We saw a glimpse of what the next generation of Audi TT would look like in Detroit earlier this year, albeit disguised as an Allroad Shooting Brake crossover. But Audi are expected to unveil a finished car in Geneva, with this third generation of car carrying Audi’s hopes of continuing the success of the sports car’s previous generations.

Sitting on the UKL1 platform shared with the new Mini, this BMW is set to be the first of 11 front-wheel drive cars based on the same platform. The 2 Series Active Tourer will be a direct competitor to cars like the Mercedes B Class, and will also be available as a seven-seater.

The new BMW 4 Series Gran Coupe is a four-door version of the 4 Series Coupe, which is in turn based on the four-door 3 Series. Aiming to be slightly more exclusive and luxurious than the now mainstream 3 Series saloon, the 4-Series Gran Coupe goes on sale in the UK on 21 June, priced from £29,420.

Citroen’s Cactus concept is expected to retain much of its design when it is unveiled in production spec at Geneva. The concept car featured futuristic styling with a simplified interior layout, with rumours suggesting the production car to be uncovered in March will remain true to this design.

With its first Turbocharged road car engine since the F40, the California T represents a huge step for the manufacturer. With more power, significantly more torque and a new look, the California might just have been given a new lease of life.

The hotly anticipated 2015 Honda Civic Type R looks like it could be revealed to the public in Geneva. Having undergone extensive testing at the Nurburgring, this next-gen hot Civic will be the fastest ever, with a turbocharged 2-litre engine producing something in the region of 280bhp. That should see it competing against the fastest of hot hatches, including the Audi S3 and Volkswagen Golf R.

Hyundai are looking to bring the next generation of Genesis to the UK, with the marque demonstrating the 2015 model at Geneva. Available with either a V6 or V8, the South Korean saloon will be the first of many upmarket cars destined for UK shores, the brand hoping to shift its image into the realms of luxury car making.

Hyundai hopes to impress at Geneva with its fuel cell crossover, the Intrado concept. Set to compete with the likes of Nissan’s Juke, the Intrado will introduce the new ‘Fluidic Sculpture’ design philosophy of the brand, whilst emphasising the marque’s interest in future technology.

The hot new Gallardo replacement is heading to Geneva to no doubt draw in as much attention as it did in January at Detroit. Utilising the 5.2-litre V10 that will also be fitted to the next-gen Audi R8 V10, the Huracan will produce 601bhp and reach a top speed of 202mph. Expect the convertible version to follow in 2015.

The production version of the NX Concept unveiled at Tokyo last year is expected to be revealed to the public in Geneva. Available with both turbo petrol and hybrid powetrains, the NX will rival BMW’s X1 and Mercedes’ GLA crossovers. The concept car featured a very futuristic exterior design; though it remains to be seen how much of that appearance will remain on the production version.

Think of this as a tweaked McLaren 12C, with a boost in power, some more fun electronic controls (allowing more tyre-smoking drifty stuff) with a new P1-inspired nose job.

Mercedes is expected to unveil the production version of its S-Class Coupe concept in Geneva. With sales expected later this year, the standard car’s 449bhp 4.7-litre V8 may also see tuning from the performance department for an AMG version to be available at a later date.

Unveiled in January at Detroit, the almost finished version of the JCW MINI will be revealed to the European public in Geneva. The car will feature the 2-litre turbo engine it was revealed with, enabling the hot-hatch to produce about 220bhp.

Peugeot’s 107 replacement looks to challenge the VW Up and the new Renault Twingo, with improved levels of interior quality and a range of incredibly frugal sub 99g/km engines. We’ll also see the new convertible TOP! model for the first time.

A brand unknown to most Europeans, Qoros’ 3 Hatch could eventually find itself in the UK if sales of the likely affordable hatch are successful on the continent. Targeting a young market, the carmaker hopes its second car will be the one to give it its break in the European market. With its first car achieving the Euro NCAP’s safest car of 2013 title, the Chinese carmaker could be one to watch.

It's big news for the Twingo, which has thrown decades of front-wheel drive evolution out of the window, taking a somewhat less conventional route with its new rear-engined supermini. We can’t wait for the Renaultsport version.

Spanish carmaker SEAT will unveil its Leon ST crossover to the European public in Geneva. With drive going to all four wheels, thicker bumpers and under body protection, this crossover will be in direct competition with the likes of BMW’s X1.

SEAT will also unveil its Leon Cupra, the hottest version of its Leon hatchback. Based on the underpinnings of the Golf GTI, the Cupra will be the most powerful car the Spanish carmaker has ever produced. Using the 260bhp TSI engine, the hot hatch is set to bring Latin flavour to the fast fleet of the Volkswagen Group.

The new Octavia gets raised ride height, the latest version of the Haldex four-wheel drive system as well as some new rugged looking bumpers and side trims.

Vauxhall has released a teaser image of an extra hot Astra, the Astra VXR Extreme. Derived from the Astra Cup race car that raced at the 2013 Nurburgring Endurance Championship, this new Extreme is labelled as a road-going race car based on the standard Astra VXR.

Revealed in Detroit this January, the Swedish answer to the Range Rover Evoque will also arrive in concept form at Geneva. With design cues and styling influences set to land in Volvo’s next generation of SUVs, the XC Coupe is the first glimpse of a range of cars the carmaker hopes will double its sales by 2020.