The McLaren 650S Spider has been shown at the Geneva motor show. Pictures, specs and video here 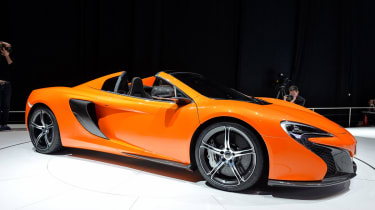 McLaren has pulled the covers off the 204mph drop-top version of its 650S supercar at the 2014 Geneva motor show.

Promising the same high-level performance as its fixed-top alternative, McLaren’s 650S Spider is mechanically identical to the Coupe with 641bhp and 500lb ft of torque produced by its twin-turbo 3.8-litre V8. Thanks to the carbon-tub used across McLaren’s range, the Spider boasts the same level of structural rigidity, ensuring handling remains uncompromised.

The open-top supercar’s 3.0secs to 62mph sprint also matches the coupe, however the added 40kg of its two-piece retractable hard-top means reaching 124mph takes 8.6secs – two tenths down on the fixed-top but still beating rival Ferrari’s 458 Speciale by five tenths.

To provide passengers with protection in the case of a roll, fixed roll-hoop shoulders sit either side of a flat glass engine cover much like in the case of the 12C Spider. Despite such drastic additions, the Spider is still dominated by the P1 influenced nose like the regular 650S.

Aside from its almost uncompromised performance, the Spider manages to largely remain as practical and user-friendly as its coupe counterpart. The folding roof can be raised or lowered in just 17secs at speeds of up to 19mph, whilst fuel consumption is exactly the same as the standard car, returning 24.2mpg on the EU cycle and 275g/km of CO2. Unsurprisingly, folding the roof down does hinder storage space, but there is still room beneath the folded tonneau when required.

As seen in the 12C Spider, the 650S Spider uses a heated rear window which is independent from the roof. This means it can be lowered to allow greater exposure to the V8’s acoustic talents or raised to reduce wind buffeting. McLaren claims it can even provide a semi-open-top experience in rain.

As expected, the car’s interior matches the coupe, with satnav, Bluetooth connectivity, DAB radio (in Europe; satellite radio in North America) and voice control included, whilst the entire cabin is trimmed in Alcantara.