Rumoured to be called the Cabrera, the Lamborghini Gallardo replacement is revealed as the 602bhp Huracan 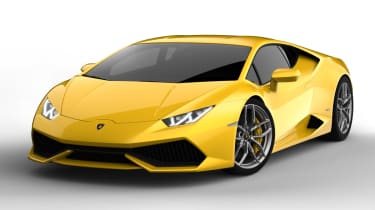 Meet the Lamborghini Huracan LP610-4, the replacement for the Gallardo. It had been rumoured to be called the Cabrera, but has instead been named Huracan, which translates from Spanish as ‘storm’, and is also the name of a legendary fighting bull from the 19th century, keeping with Lambo naming tradition.

After ten years of production and 14,022 sales – around half of Lamborghini’s all-time total – the Gallardo’s shoes are particularly large and daunting ones to fill, but the Huracan looks and sounds willing and able to try. It looks bold, a mix of Aventador styling cues with a much tauter, more squat shape. It means business.

With its new ‘IDS’ 5.2-litre V10 engine, backing up the styling ought not to be an issue. IDS stands for Iniezione Diretta Stratificata, a mixture of direct and indirect fuel injection. So while it’s identical to the Gallardo’s engine in size, ten-cylinder layout and natural aspiration, its power and torque figures are much higher while fuel consumption and CO2 emission figures decrease.

Peak outputs of 602bhp at 8250rpm and 413lb ft at 6500rpm represent rises of 50bhp and 15lb ft over the regular Gallardo LP560-4, yielding an improvement in performance, though the Huracan’s 202mph-plus top speed and 3.5sec 0-60 time aren’t vastly superior to before. They’re still pretty scintillating numbers, of course, as is a 9.9sec 0-124mph time. The engine is EU6 compliant and Lamborghini claims 290g/km CO2 emissions and 22.6mpg fuel economy.

The engine drives all four wheels via another acronym, LDF. Lamborghini Doppia Frizione is the exceedingly glamorous name for a seven-speed dual-clutch gearbox, the first time such a transmission has been used in a Lambo. It means the end not only for the slightly clunky ‘E-gear’ system, but the end of the manual-shift Lamborghini. Sad, but inevitable.

The Huracan’s chassis is a mixture of carbon and aluminium, endowing it with a 1422kg dry weight, marginally up on the Gallardo. The Huracan comes with selectable driving modes – Strada, Sport and Corsa – which suitably adjust the settings of the gearbox, engine map, soundtrack, four-wheel-drive system and the ESP stability control. Carbon ceramic brakes are standard – keeping the Huracan in touch with the Ferrari 458 Italia it aims to beat – while a variable steering ratio system and magneto-rheological damper control are among the options.

Inside, the Lamborghini Huracan gets a 12.3 inch colour TFT instrument panel which boasts the rev counter and speedometer as well as a satnav and infotainment displays. The rest of the interior is a mixture of Nappa leather and Alcantara. If the Gallardo is anything to go by, expect a Huracan Spyder within 18 months and Superleggera and Performante performance variants further down the line, as well as a healthy pile of special editions. Whether an entry-level rear-wheel-drive Huracan arrives, a la Gallardo LP550-2 and Valentino Balboni special edition, remains to be seen. But judging by the extra dose of character those cars provided – and additional profit potential they provided the regular LP560-4 versions of the Gallardo – we can probably be optimistic about the possibility. The Lamborghini Huracan LP610-4 will be one of the show stars at March 2014’s Geneva motor show, with the first customer deliveries shortly afterwards. Expect prices starting at around £170,000. The next Audi R8 is expected to follow a year later, with related mechanicals, a lower power output and a more mainstream price tag.