Limited edition Gallardo goes rear-wheel drive. So, just how scary is it exactly? 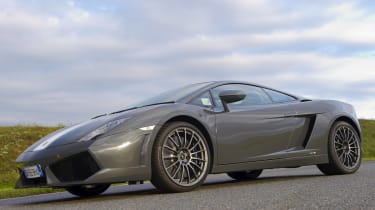 It powerslides. Of course it powerslides. Even the four-wheel-drive one powerslides (given enough provocation…). So what makes the arrival of the LP550-2 Valentino Balboni so exciting? Thrilling enough that we tingled with anticipation when the news filtered through and goggled at the first studio pictures like schoolboys around a copy of Knave?

Partly it’s that Lamborghini has had the guts to allow its (retired) chief test driver to create the car he wants, but more than that it’s what this car represents. This is Lamborghini distancing itself from Audi, rejecting the 4wd gospel, embracing a back-to-basics philosophy, envisaging a future in which rear-wheel drive still plays a part. It gives us hope that Lamborghini thinks like we do, understands that the thrill of driving isn’t just about outright speed, and, more importantly, that it’s prepared to do something about it.

If only to the tune of 250 examples. The Valentino Balboni is a limited edition, the first rear-wheel-drive road-going Lamborghini since the Diablo SV, launched 15 years ago. In common with its ancestor, its price dictates that it’s the entry-level model, but unlike the SV it’s not a raw, uncompromising road racer – it comes with satnav, a rear-view camera, Bluetooth and the nifty nose-lifting device.

What it doesn’t have, at least as standard, are the two things that have held the Gallardo back in previous tests we’ve conducted, most notably last year’s eCoty: ceramic brakes and the e-gear transmission. Unfortunately our test car has been equipped with the former, the dark discs rounding off a colour theme that starts grey and gets greyer. Apart from the stripe obviously. The white and gold colouring has no specific relevance to Lamborghini, but it’s a useful visual identifier and a damn sight more prominent than the signed plaque that sits behind the rear quarter window, partially obscured by the watermark on the glass.

There’s no starter button here – in fact no gimmicks at all. No switchable dampers, no Corsa mode for the gearbox or stability control, no button to sharpen up the throttle. This is refreshing. ‘Just get out there and drive’ seems to be the implicit message here. Message received and understood.

The V10 is idling raucously. First gear engages with a smooth sshhh-clack, clutch (no weightier than a 911’s) comes up judder-free, manoeuvring out of the office car park is accomplished with none of the full-lock diff judder you get in the LP560-4. That’s the first major difference.

There are plenty more. The V10 delivers a hit akin to a mallet on a drawing pin, a wonderfully excessive swipe of power that flattens you into the seat. The LP560-4 doesn’t feel this fast and the 30kg weight saving certainly doesn’t account for the ferocious energy the 5.2 now seems able to unleash.

I think the answer to this is partially real and partially imagined. Even though Lambo has tweaked the ECU to drop power 10bhp (forgive me for being cynical, but I assume this has been done to ensure that 550 and 560 have matching power-to-weight ratios), having no front driveshafts means there are fewer losses through the transmission. It also means the sensations of speed are heightened because the rear wheels are put under more pressure, forced nearer the edge of traction. You feel that in the way the LP550-2 is so active when accelerating along a bumpy road, the diff juggling 398lb ft of torque. This movement, an almost imperceptible, tightly controlled squat and sway from the rear end, is a new sensation, and another clear signal that feel and communication are of central importance to the Balboni.

Within a few miles the LP550’s ability to captivate the driver has won me over completely. The steering, free from drivetrain corruption, has a new lease of life – it’s fresh and bubbly, has less inertia, yet still has confidence-inspiring weight. It makes the LP550 a livelier car, helps you to judge the precise moment you can start to oh-so-gently feed the power back in, adjusting the cornering angle for a maximum-attack exit.

It’s later than you think. The instant you bring the V10 into play the diff goes to work, the rear edging out in readiness for steering lock to be wound off. Try to pile more power on now and all you’ll get is a flashing orange light. If you’ve been foolhardy enough to disengage the ESP, you’ll sense the rear edge out in direct proportion to the amount of throttle you’ve put in.

It’s a very predictable, very controllable car, but you absolutely cannot be rash, cannot take liberties with it. If you do, especially in the wet, it quickly becomes discomforting, unsettling – it’s a proper rear-drive supercar in other words. The safety systems are there, but if you switch them off, on your head be it.

The trouble is that the LP550-2 eggs you on. The trumpeting engine loves to get in on the action, launching a vocal assault and hammer- blow of acceleration with no thought for the consequences. It takes real bravery to keep it pinned beyond 6000rpm in the wet, so don’t bother – save that for a fairer day and instead make use of what must be Lamborghini’s best ever open-gate gearshift. It has much in common with the R8’s by the feel of it. Bad bits? As ever, it’s the brakes that spoil the Balboni’s party. I can’t see how the standard steel set-up could be worse to use than the carbon discs, which give you nothing up top, a dead mid-travel and then immense sudden power, which the nose reacts to by darting and weaving. The ride? Unremittingly firm the fully revised set-up most certainly is, yet it has an uncanny ability to round off sharp edges and absorb bigger impacts. At the Bedford Autodrome it slides like it drives: with real precision, but an appetite for exploiting human errors. You have to respect it.

There had been a concern, admittedly a small one, that this was a marketing car, old Balboni’s name slapped on to bolster sales in a slow year. It’s not. Instead it’s as good as we dared hope – the best Gallardo yet.

The 2020 Porsche Cayman GTS 4.0 regains its flat-six and therefore top-billing in the class. It’s a brilliant package for those whom a GT4 is a bit to…
Visit/toyota/202232/250bhp-toyota-gr-corolla-hot-hatch-in-the-pipeline