V10 Lambo gets visual makeover and even more power 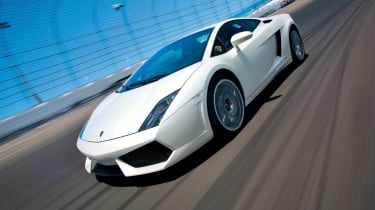 So seriously is this social responsibility being taken that the new Gallardo LP560-4 comes with a new, pedestrian-friendly front end and, for this first drive of the car, a heartfelt exhortation from its creators not to exceed the local Las Vegas roads’ hyper-nannying speed limits – limits based on the abilities of a 20-year-old Chrysler Voyager with bald tyres, dead dampers and no brakes rather than those of a four-wheel-drive supercar retarded, optionally, by carbon-ceramic brakes.

Luckily there’s the Las Vegas Motor Speedway. Here we can discover what the LP560-4 is mostly about, and chiefly the LP560-4 is about a brand new engine, which, says engineering chief Maurizio Reggiani, has no commonality with any 90-degree V10 that Audi might make apart from the odd pu mp (it has no fewer than three scavenge pumps for its dry sump) or sensor. Its capacity is up from 4961cc to 5204, taking power up by 39bhp to 552bhp (or 560 PS – hence the model name) at 8000rpm, while torque climbs from 376lb ft to 398 at the 6500rpm peak of a flatter torque curve.

The bigger capacity comes partly from bigger bores, for which there was no room in the old engine, so there’s a new block with more widely spaced bore centres. That called for a longer crankshaft, for which Reggiani had doubts about the strength of the old engine’s split-crankpin design, so the new engine’s opposing cylinders share a common, unsplit crankpin and to hell with even firing intervals. To add further sonic mystery, each bank has a three-into-one and a two-into-one manifold, each ‘one’ then joining downstream.

Also new is the way the optional e-gear sequential gearbox selects its ratios, now by rotating cam instead of a pair of hydraulic rams. The result is shifts as quick as 120 milliseconds from torque cut to torque reinstatement (that is the whole shift, not just the gear engagement), down from 200ms. The new mechanism saves 13kg, too. Then there’s the revised suspension with an extra toe-control link at the rear, plus lighter brakes with better ventilation. Indeed the whole car is lighter by 20kg, despite the engine weighing 10kg more.

Sonic mystery… Lambo CEO Stephan Winkelmann, whose name suggests Germanicness but whose looks and speech are decidedly Italian (he grew up there), walks along the long dinner table to tell us of the Gallardo’s new attributes. Then he is replaced by dancing girls with attitude, who take care to avoid the many wine glasses, while LP560-4s snarl past the windows, radio microphones by their exhaust pipes. Sound is central to this car. It’s a hard, dirty, savage sound, an explosion of energy, an automotive Tourette’s, yet somehow it gets past drive-by noise regulations.

Day two and we’re at the Speedway, about to chase a Murciélago driven by a Lamborghini test driver. Even a throttle blip in the pit lane turns each cylinder into a firecracker. Yet this newest Gallardo doesn’t look as menacing as it sounds. The satin-black one on radial-spoke Superleggera wheels looks the moodiest, the white ones with gloss-black wheels look the purest. Some have new polished-aluminium lattice-spoke wheels, which are much too Ripspeed for my taste.

That new nose is longer, more chiselled, more Reventón. Slimmer headlights, with optional LED running lights, make it look sterner. There are more LEDs, fashioned in a repeat of Y-shapes, in the narrow tail-lights, which no longer flow up into the rear deck. Designer Manfred Fitzgerald says the idea is to make the Gallardo look wider and flatter, because Lamborghinis should be wide and flat. He also thinks LEDs can be over-used and has tried to keep these discreet. Helped by a new rear diffuser, the revised body shape gives 32 per cent more downforce to give a total of 20kg on the front wheels and 50kg on the rears at full chat.

Inside, things look much as before apart from glitzy knurled switches above the centre console and clearer instrument graphics. And, in this e-gear car (as they all are here, like 90 per cent of customer cars) there’s a new ‘Corsa’ button, which activates the fastest gearshifts and the standing-back-with-arms-folded ESP mode. It gets pressed, but we’ll save killing the ESP completely for later.

Onto the banking, down into the infield. Yes, the low-end torque is plentiful, but then it wasn’t exactly lacking in the previous car. But around 4000rpm – a significant point in the variable valve timing’s modus operandi – the note changes from something boomy and gruffly V8-like to a hard-edged barrage of sound waves in which the former neat, tidy, 10-cylinder half-octave harmonic has been ousted by something much more complex.

If I don’t ease the throttle slightly the upshift has a savagery to match, but the downshift is perfect. Reggiani says the problem with a twin-clutch transmission is that customers prefer a gearchange to have a definite jerk when they’re trying hard (I don’t agree, and I expect you don’t either), and the e-gear provides this. It’s also lighter. Anyway, e-gear does give a scope for honing your skills in a way a twin-clutch system wouldn’t, and that is a good thing.This Gallardo has a suede-and-carbonfibre steering wheel, preferable to the standard leather version whose flattened, plastic base feels as cheap as the similar one did in the Audi RS4. Via it I feel initial understeer as I aim through the infield corners, but the now quicker-acting viscous coupling sends energy decisively rearwards as I apply power, making the understeer evaporate.

In Corsa mode the LP560 becomes deliciously steerable on the throttle, helped by the limited-slip differential at the rear, but the oversteer decays before it gets out of hand. It’s the worry-free mode; ESP off, by comparison, brings on a tetchy tail that could be bad news in the wet.

Sport mode? That’s a notch down from Corsa, and the trade-off for smoother full-bore upshifts is the need to apply power later in the corner, otherwise the nose is pushed wide. And normal mode is pointless on the track, as you’d imagine.

The new, low-rolling-resistance Pirelli P Zeros seemingly sacrifice no grip to their CO2-friendly rotation, but I’m unimpressed with the carbon brakes, whose pedal action is worryingly soggy on the track. Out on the road, meanwhile, they feel springy, snatchy and ill-defined, so I’d suggest specifying your LP560 with the regular stoppers. There’s not much you can do about the hard-edged ride, though, which is unforgiving of broken road surfaces and a fly in the ointment for this faster, madder Gallardo.

And if you want to find out just how mad the LP560-4 is there’s a ‘thrust’ control in the e-gear system, used when in automatic mode with Sport or Corsa in play. It’s like Ferrari’s launch control and it’s how you get the 0-62mph time down to 3.7sec and the 0-124mph to 11.8sec. Not that you ever would in a socially responsible Lamborghini, of course.