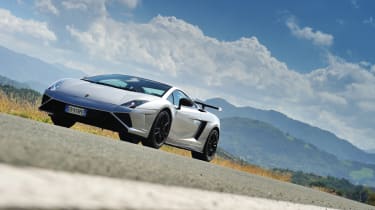 The Lamborghini Gallardo LP570-4 Squadra Corse. It’s one of the most long-winded car names you’ll find but it’s applied to one of the easiest cars to understand; here is the most powerful and extreme production Lambo Gallardo you can buy. In all probability it’s the final version of the Gallardo before its replacement, the Cabrera, is launched next year, and prices start at £200,407.

It’s essentially a Gallardo LP570-4 Superleggera with the rear wing and lightweight fast-release engine cover from the Super Trofeo race car. That means 562bhp, doing 0-60 in little over three seconds and a 199mph top speed.

While it’s tempting to think of the Gallardo as a marketing-led entry-level ‘baby Lambo’ with the inevitable job of facing off the Porsche 911 and the Ferrari 360 Modena, it fundamentally outgunned its rivals in 2003 with weapons that would stand it in good stead for a decade.

There have been a few facelifts over its production life, but I don’t think any Gallardo has looked quite as perfectly balanced or as purposeful as the Squadra Corse. Big rear wings are always controversial, but this one is an elegantly proportioned thing of beauty, lifted essentially unchanged from the rump of the Trofeo racer. It’s claimed to provide three times the downforce of the much more discreet item on the LP570-4 Superleggera coupe.

The Squadra Corse, which benefits from the same carbonfibre weight loss regime originally instigated by engineer Maurizio Reggiani and his team on the first-generation Superleggera ‘to reach more deeply into the power-to-weight potential of the car’, is possibly a few grams lighter. But, whichever way you cut it, 1340kg (dry) is pretty trim and gives the Squadra Corse a power-to-weight ratio of 426bhp/ton. A 458 Italia checks in at 414bhp/ton dry.

When you punt a Superleggera into a bend at what frankly seems an optimistic lick, it has the ability to make you feel like a bit of a wimp, as if it’s thinking: ‘Is that all you’ve got? Try again.’ So you do and the result is much the same: more grip, more lateral G, more traction, but nothing much more required in the way of positive steering lock or correction at the helm. It’s a hugely secure way to deploy 562bhp that, when harnessed to the Gallardo’s shrink-wrapped dimensions, results in devastating pace across the ground, with all the supercar sensations a small boy could dream of but demanding a modest input of car control. Ultimately, the Superleggera can be provoked, but you have to be brutal.

The Squadra Corse cannot, at least not with me at the wheel. I try in Corsa, I try with the ESC switched off. But on the Raticosa Pass bend that in times past has served up balletically drifting Lamborghini Aventadors and Ferrari F12s for the viewfinder of Dean’s Nikon, the Squadra Corse simply bullets through the curve at an absurd speed. No understeer, no oversteer. Only on the final few banzai runs is there a gradual, neutral, all-of-a-piece relinquishing of the chosen line as the Pirelli P Zero Corsas finally start to let go.

Is it due to the rear wing? Possibly. But it is an extraordinary display that translates into an aura of invincibility I don’t think I’ve ever encountered in a road car before. I don’t think I’ve driven a faster car between two points than the Squadra Corse, certainly not one that distils and intensifies the supercar experience so potently.

Technology wise, the Gallardo has long been left behind by the £178,526, 562bhp Ferrari 458 Italia and £176,000, 616bhp McLaren 12C. But some will be smitten by the Squadra Corse’s pure racecar looks, and it’s hard to deny that with this Gallardo edition, Lamborghini has saved the very best until last.

It might translate from Spanish to English as ‘goat herd’, but the new Cabrera is set to mate a more powerful 5.2-litre V10 engine with weight-saving technology seen in the wild Sesto Elemento concept. Read more details on the Gallardo replacement here.