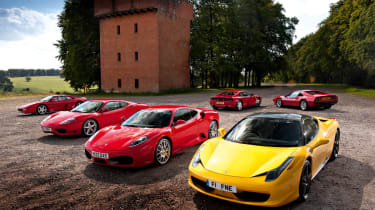 At my parents’ home, tucked away under bubble-wrap in several drawers and dusty boxes, I have a collection of small, die-cast models ranging from 1:43 to 1:18 scale. They’re mostly red. As a small boy, I loved Ferraris.

I think it stemmed initially from that magical Rosso Corsa paintwork, the way it made them stand out from the common herd, but the whole aura of the company soon mesmerised me. Just catching a glimpse of one of its cars travelling down the other side of a motorway could make the hairs stand up on the back of my neck. And if I happened upon one in a car park I could spend hours just walking around it in awe and wonder, looking at the gleaming details. If that small boy could have known that one day he would find himself in the driver’s seat of an F355 hammering down to Salisbury where five other Ferraris were waiting…

It’s a very simple idea really, and I’m sure you’ve made the link already, but the aim of the next few pages is to chart the progress (or not) and driving experiences of Ferrari’s V8 road cars over the last 30 years or so. Maranello might have made its name with 12 cylinders, but in the last three decades the smaller Ferraris have arguably been more important as they are the ones that have been the stuff of dreams for more people, allowing them to think, ‘maybe, one day’. 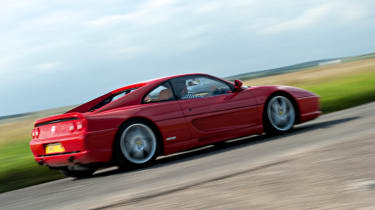 The early-morning traffic on the A303 is surprisingly light and the dual carriageway snakes away into the distance largely empty. Mid-engined Ferraris all offer a fantastic view out through their laid-back windscreens and it gives a distinctive and impressively airy feeling to the low cockpit. I picked up this F1 Berlinetta from its very kind owner in Surrey last night and it’s amazing how supple it feels and how light the power steering is and how incredible the… but I’m getting ahead of myself – we need to start at the beginning.

We’re meeting on a small triangle of roads just north of Stonehenge and base camp for the day is a huge and extremely picturesque gravel area that the army, who range across the plain, have allowed us to use. They make a magnificent sight, the six cars lined up in the sunshine, and a few things stand out straight away (apart from the Giallo Fly in the otherwise Rosso ointment). Three cars with pop-up headlights; three with faired-in lamps; three with engines on display, three not. Apart from the ‘Challenge’ wheels on the F430, there is a neat progression of ever more spindly-spoked five-star wheels. And the 348 stands out in the group as a product of the ’80s, with a lot more straight lines and square edges in its design than the others. It’s also the only one without round rear lights. The 458 is the first not to have four pipes poking out from the rear… It’s fascinating.