It's got less weight and more power, but does it add up to a better Gallardo? New Lamborghini LP570-4 Superleggera supercar reviewed 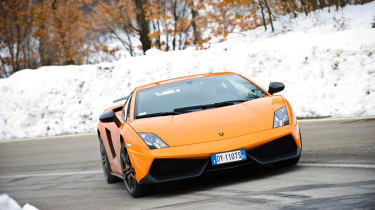 Here’s a grandiose statement with which to begin this month’s Driven section: the baby supercar is currently poised at its most interesting juncture in decades. In fact, it’s hard to think of a time when it was ever as interesting as it is now.

Last year the Ferrari 458 forced any of us lucky enough to drive it to reappraise what was possible from a small-ish, mid-engined coupe. It was the imperious application of technology that came as such a surprise. Here was Ferrari showing us its intended direction – a world of chassis, transmission and engine deliberately, boastfully aided by electronics. The first digital supercar.

Could the new LP570-4 Superleggera be more different? Short of removing the fuel injection from its 5.2-litre V10 and racking up a set of downdraught Webers, it’s hard to see how. Only Lamborghini could launch a car like this at a time like this. The Geneva show was rammed with hybrids and other worthiness, and Lambo gave us a 562bhp, 1340kg Gallardo whose starter motor is probably thirstier than a Porsche 918 under full throttle.

This is the natural progression of the analogue baby supercar, a celebration of a simpler driver/machine relationship. As Ferrari and McLaren continue to forge new technologies, so Lamborghini has reached for the simplest of the R&D recipe books: remove weight and add power.

Taking weight out of a Gallardo is a tricky business because the car’s structure is mostly aluminium and there’s precious little that hasn’t already been lightened or fashioned from some exotic material. Still, the Superleggera shaves 70kg from the weight of the ‘standard’ LP560‑4 and does so mainly by extensive use of carbonfibre, including the engine cover, sills, rear diffuser and the seat shells. Thinner glass for the windscreen and side windows, and Perspex for the rear quarter-windows and rear screen help shave a few more grams.

With the engine management remapped to extract another 10bhp from high-octane fuel, the LP570-4’s power-to-weight ratio is up to 399bhp per ton from the LP560’s 384bhp per ton. Don’t know about you, but I have to pinch myself when I see numbers like that. After all, it wasn’t all that long ago that anything around 300bhp per ton was decidedly tasty.

As you’d expect, it’s a looker. The carbon rear wing might be a little apologetic, but the new chin protrusion cuts just the right Mini-Me Murci SV look, and the rear diffuser is one of few such appendages that genuinely looks like it should be fitted to a racing car.

The Superleggera doesn’t appear to sit any lower than the standard car, but the new forged wheels with their slim spokes not only provide a 13kg weight reduction, they also give excellent visual access to the optional carbon-ceramic brakes fitted to our test car: 380mm at the front, gripped by vast eight-piston calipers, and 356mm at the back.

There are subtle differences from the moment your fingers pull on the chunky door handle – the mechanism clunks with a hollow sound thanks to the carbon door cards and the door itself swings more easily towards you. You settle into the fixed-back bucket and, if you’re my shape, curse the lack of support for the base of your spine and hope that you’ll find some way of being comfortable pretty soon.

There are no fancy buttons to wake the V10, just an ex-Audi key to twist, and with that action comes one of the better noises currently available for sale. After a brief burst of high-frequency starter wail, the engine catches with a naughty thrrrrump of energy, then settles to an even idle. Sadly, there is no chrome-topped lever surrounded by an exposed gate in this car (a manual ’change is available as a no-cost option), instead there are two paddles behind the wheel rim. This is an e-gear-equipped car, and I’m worried that after the double-clutch brilliance of the 458, this is the component that will expose the Superleggera.

Nothing can prepare you for how good it turns out to be. Loping out of Sant’Agata, I’m waiting for it to jolt, hunt and stink of burning clutch, but instead the gearbox slurs those awkward part-throttle, low-speed changes with such remarkable deftness that it almost feels like – dare I say it? – a dual-clutch ’box. It’s a real surprise because Lamborghini claims to have made no changes to it whatsoever over the standard car, meaning that just as it looks like the hydraulically actuated manual ’box is about to be pensioned off in favour of these clever pre-selecting transmissions, it appears to finally work. We’ve only waited 13 years.

The chassis feels quite different to the standard car’s. Firmer bushes and increased spring and damper rates bring a slight deterioration in ride, although to nothing like the extent you’d expect. But the main differences lie in the connection you feel with the car, because it genuinely does feel quasi-racer in the way it transmits messages straight up your spinal cord. Also through its increased agility; ‘Superleggera’ might as well mean ‘slack-free’ in English for the way that the car responds to minute inputs, especially the steering, which, now that the 458 has chosen a deliberately ‘feel-free’ but savagely quick system, positively shouts at you, loading, unloading and generally wriggling about.

You do feel connected to this car, but I have to temper that by saying that I’ve always felt connected to every version of the Gallardo, so the question for me remains, how does the LP570-4 move the game on over the already quite superb LP560-4?

Certainly it’ll take a more sensitive bottom than mine to notice any increase in performance. Yes, the claims are there (0-62mph down by two tenths to 3.5sec), but on the road I just couldn’t spot any tangible change over the already rabidly fast LP560. It makes a little bit more noise with the Corsa button pressed, but otherwise the powertrain feels near-as-dammit identical. The chassis does come alive, though – even if the roads east of Modena just aren’t big enough to let a car like this show what it’s capable of.

The bespoke Pirelli Corsas don’t seem to care much that the ambient temperature is close to zero, hanging on impressively over a mixture of dry and damp surfaces. The brake pedal is worthy of a mention too: Lamborghini more than any other car maker has struggled with pedal feel on its ceramic brakes, but they’re much better on this Gallardo than on the last one I drove. Of course, we didn’t even get the blighters hot on our road route.

Retaining the four-wheel-drive system was the correct decision too. The extra traction will certainly be a benefit for track work, but for some strange reason the car seems to have a better balance, even when it does step into oversteer, than last year’s two-wheel-drive Balboni edition. That move doesn’t take much provocation either, because the newly calibrated ESP system allows considerable slip in both Sport and Corsa modes.

With either of those engaged comes a gearshift that is blindingly fast, perhaps not as quick as a dual-clutch system, but not far off and all the while so much more alive, physical and enjoyable; the great bang it gives under full power from first to second might just be enough to justify the expected £175,000 price. Then again, I seem to remember the regular LP560 doing something very similar.

And this was how I ended up approaching the Superleggera. Every time it did something I thought exceptional or particularly enjoyable I found myself grinning with satisfaction, only to recount a time that the standard car had managed something very, very similar. This is in part unfair, because I suspect where the Superleggera would really prove its worth is on a racetrack where the weight reduction, specially developed rubber and improved downforce would shine through. But whereas a 430 Scuderia immediately felt like a step change over the standard F430, even on the road, this car doesn’t achieve the same improvement over the LP560-4.

Yes, it is bubbling with character and analogue charm. It can summon outrageous pace, enough to make the claimed 0-124mph time of 10.2sec seem quite achievable, but it’s hard to conclude that the Superleggera does much more than confirm that the Gallardo concept, in its current form, is probably nearing the end of its life – and that its development path has already taken it to an impressive peak with the outstanding LP560-4. For me, just as with the last Superleggera back in 2006, this car serves to remind me how great the standard machine already is.