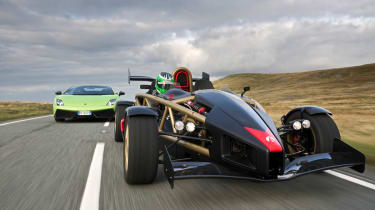 By the time you read this, the next chapter in Lamborghini’s future will be well and truly in the public domain (see the new Sesto Elemento for the shape of things to come). Just as well, because for the past few years the company has been something of a worry, lacking new products and recording declining sales. The Gallardo may have enjoyed a facelift in 2008, but during its seven-year existence Ferrari has not only launched and killed the 430 but recalibrated expectations with the 458.

It’s hard, bumbling down the M4 in a snot-green LP570-4 Superlegerra, surrounded by switchgear last seen in an Audi A4 back in 2006, to conclude that the Gallardo is anything other than outdated – that perhaps Lamborghini made a mistake not launching a successor sooner.

It could also be said that the fool who attempts to define any Lamborghini on a clogged patch of three-laner near Newport deserves to be detained in one of Her Majesty’s secure hospitals, because it is entirely the wrong environment for the machine, although oddly this particular example of the fastest, leanest Gallardo has the full complement of goodies – navigation, hi-fi and electric windows.

On a constant throttle, the 5204cc V10 drones away behind your left ear, but the slightest increase in crank speed reminds you why the Gallardo will always be a great car – it also urges you to define Lamborghini in more simplistic terms than you’d normally apply. Strange that a brief blurt of barely silenced V10 should usher such feelings, but then this is a sensuous car, one that makes no secret of its intention to snare your emotions. Beyond any other auto-maker, Lamborghini excels in this single, crucial discipline – it makes the finest emotional cars in the world. Even on a dreary stretch of the M4, the LP570 SL is never more than a few hundred rpm from reminding you of that fact.

In many ways this Superlegerra epitomises the final point of the evolution of the conventional, useable supercar – and by that I mean a car which is small enough and inexpensive enough to be used on the public highway the way God intended. Yes, those qualifiers are relative when discussing something that costs £174,480 and will hit 100mph in under 8sec, but the Gallardo casts a smaller shadow than most people would expect and its rear-biased 4WD has always offered a clever blend of excitement and useful traction. Moreover, it’s an involving experience the Superlegerra, even though it’s a shame that this car has the e-gear paddles rather than a great big lump of chrome emerging from between the seats.

Driven, slithered, savoured like this, the 570 does feel about as naughty as a road-legal supercar should. But here’s a thing: what does it feel like to step from a car that you suspect straddles the invisible boundary between sensible and potentially trouble-making, and into an Atom V8? Well, I’d like to tell you.

On the page, the Atom looks otherworldly: like someone locked Gordon Murray in a shed for three days with nothing but a Mecano set, several trips and three bottles of scrumpy. In fact it’s so otherworldly that it never quite registers as a motor car with some people: they just stare at it with the glazed incomprehension of the tourist at Victoria Falls.

It has delicious control weightings, the Atom. It encourages childish fondling when stationary, so you twiddle the wheel and prod the pedals to feel the resistance they offer your limbs. Getting the car moving is an undeniably self-conscious event, because people around you can see what you are doing, so you take extra care and attention over your inputs – like leaning over to reach for something on the beach and just clenching your abdominals to keep that belly in check. I like that. It defines the Atom driving experience as something to savour, but it also pre-empts in-line savagery of a type that makes the Superlegerra – a car that an hour earlier seemed almost too violent for the public road – feel plain underpowered.

It isn’t easy to drive the Atom slowly, not because it suffers any great tantrums or the sort of low-rev histrionics that might be expected of such a specialised combination of high-revving, torque-shy motor and competition-spec straight-cut gearbox – but because it works so well. You pull the right-hand paddle, which is perfectly sprung to provide just the right amount of resistance. Any fears that dispensing with the services of a gearlever might detract from the Atom experience subside the moment you hear a hiss of pneumatic pressure and the distinctive clatter of dog-gears engaging. This is not some god-awful actuated manual ’box, but a pukka Sadev ST90 whose day-job is being abused by some S2000 rally car driver.

And still it is perfectly easy to use: select first, release the clutch and the car will pull uphill without any extra throttle: we shouldn’t forget that with ‘just’ 284lb ft of torque, the Atom’s torque-to-weight ratio is 525lb ft per ton, but oddly enough that figure doesn’t echo inside your crash helmet as you pootle out onto the street. It is somewhat overshadowed by the 877bhp-per-ton Ariel claims for this £147,000 machine. I have never driven something so punchy that doesn’t live exclusively on a circuit and enjoy the benefits of vast rear slick tyres.

So why is it such a doddle at low speed? Masterful calibration I suppose: the engine and gearbox feel made for each other, in the way a pair of Hyabusa motors sharing a flat-plane crank and bolted to a rally tranny have absolutely no right to. The rev-counter is configured to provide information on the upper reaches of the rev-range, so it’s actually difficult to see how low it will lug, but like I said, it’ll pull first from idle and then any small increments of throttle from thereon in.

To protect the dog-rings, there’s a throttle sensor that doesn’t allow clutchless gearchanges without at least ten per cent throttle, but if needs be you can dip the left pedal to shift gears at very low speed. You rarely choose that option though, because feeling and hearing the gearbox work even remotely hard is so captivating that you push a little harder.

The V8 is both an easier and much more pleasurable car to drive than an Atom 300. This again comes as a surprise because on paper it looks psychotically over-endowed. Being naturally aspirated is the key advantage, in that it gives the driver much more accurate control of the power delivery and, more importantly, torque delivery. Whereas the Atom 300 driver is never quite sure when the supercharger will rouse itself and deliver a spurt of energy that requires attention very quickly (in my experience, normally just when you neither want or expect it), the V8 holds no great surprises.

Actually, that’s a complete lie. It holds suitcases full of surprises because it is that very rare thing: a car whose ultimate straight-line potential is only useable for very, very short bursts. What I should have said is that its deployment is at least predictable.

The chassis is firmer than anything we’ve seen before from Ariel. The V8 uses Intrax suspension with inboard adjustable dampers. It’s set up for track use so feels pretty busy on the road, but not so unyielding that it hinders progress. Its most impressive aspect is traction: you’d have thought that fitting a firmer spring and adding a load of compression damping would have played havoc with the exit phase of a bumpy Welsh bend, but the Toyos claw into the surface and the car rockets away.

It is a frustrating experience at times. If the Ariel team have done a superb job of de-stressing a potentially overbearing driving experience, the fact remains that the car just doesn’t feel right on a trailing throttle. Nor, most importantly, does it sound right. The Atom has always been a sensory overload, but this version communicates even more cleanly than the others through noise. On a trailing throttle everything sounds a little slack and lazy, like it isn’t functioning properly, but under load everything blends into a seamless whole so enjoyable you really don’t want it to end.

And this is the crux of these two cars; they are as much about the human body’s reaction to their behaviour as they are a simple driving experience. I swap between the two several more times and, as you’d expect, the transition becomes less marked as I learn to accommodate their specific needs.

I then drive the LP570 home and find myself reliving the feelings I’d felt back in March when I first drove it. It’s a classically exuberant machine from a company that does such cars brilliantly, but unlike the other ‘specials’ out there  – the Porsche RSs, the Ferrari Scuderias – it isn’t a paradigm leap in performance or, more importantly, driving experience.

Then there’s the driver’s seat itself. Now, I am so short that seat comfort is hardly ever an issue, but the SL’s carbon buckets are the most uncomfortable chairs I’ve ever sat in, and everyone else who drove it agreed. But here’s the rub: by the time I’d stuffed a jumper behind the small of my back and arrived home I was back in Lamborghini mode. Once again its sheer exuberance had won me over, that superb V10 proving that Sant Agata understands intake and exhaust noise better than anyone else. I will be very sad to see the Gallardo go, when it is eventually replaced.

However, the Atom V8 experience is unlike anything else on Planet Car. It does things no other car can do – it is genuinely more accelerative than a Veyron and it exposes your body to the full fury of that achievement. But it is also a beautifully resolved piece of engineering, from the gold powder-coated chassis, to the brilliant new dashboard and revised chassis. It feels finished. It is the most exciting road car I have ever driven and deserves to be ranked as one of the definitive driving experiences. One that even a green Lamborghini must defer to.