Citroen has revealed a new concept car, which could go into production, and points at what future models in the C-range could look like. Pictures and details here 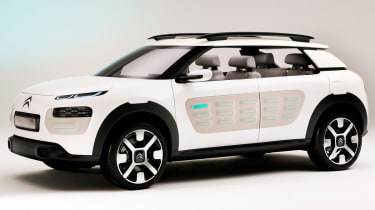 Citroen has revealed the Cactus concept car, ahead of the public debut at the Frankfurt motor show. The car is based around the current C4 and is expected to reach production, in one form or another, next year.

The overall design of the Cactus is said to point towards the future of the Citroen’s C-line model range. Inside the cabin, a single JLR-style screen has replaced the instrument cluster – although with a more radical interface – and all the other controls are operated via the centrally mounted touch screen.

Citroen’s new ‘airbump’ capsules are an interesting design feature, which will apparently make it to the production car. Air-filled capsules, which can be seen on the doors and bumpers of the Cactus, feature a soft skin that protects the body of the car by absorbing minor impacts.

Although the Cactus is powered by a hybrid drivetrain, it is not petrol-electric system like most. Citroen has been developing a system based on using compressed air and hydraulics to store energy, which can then be released when needed – offering fuel economy of a claimed 94mpg. A 'PureTech' petrol engine powers the concept.