The Jaguar XJ Supersport is the most potent big Jag until the new XJR arrives. The best of its breed? 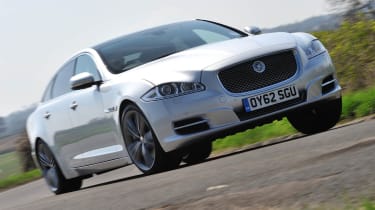 The Jaguar XJ Supersport, the supercharged V8 petrol version of the British firm’s biggest car in its 2013 model year guise. Prices kick off at £91,770 while the long-wheelbase XJ L (tested here) is a slightly chunkier £95,270. Until the new 542bhp XJR arrives later in 2013, this is the fastest XJ for sale.

At its heart is the 503bhp supercharged 5-litre V8 engine, familiar from all manner of Jaguar Land Rover operations, namely the most ostentatious Range Rovers, the XFR sports saloon and XKR sports car. The Jaguar F-type V8 S uses a detuned 488bhp version, linked to the same eight-speed ZF automatic gearbox as the Supersport. The upcoming XJR – which looks set to eventually replace the SS – takes this engine in a more raucous 542bhp state of tune.

Otherwise, the XJ Supersport is predictably bursting with standard technology: Adaptive Dynamics, electronically controlled differential, power-opening bootlid, massaging seats and the passenger-wowing dual-view screen on its dashboard. The latter can simultaneously show the driver satnav functions while allowing the person in the front seat to watch TV or DVDs; those in the back also get a screen each and there are wireless headphones for each passenger.What’s it like to drive?

All XJs drive well – we’re particular fans of the 3-litre V6 diesel – but none can match just how special this eight-cylinder car feels. There are flaws – the ride quality falls somewhere between cosseting and sharp, offering a relatively good mix of ability but pitching it away from both smooth limos (Audi A8, Mercedes S-class) and out-and-out sports saloons (BMW M5, Porsche Panamera).

But rather than plonk the XJ in no-man’s land, it gives the big Jag more honed appeal. Here’s a car with abundant luxury (and tons of rear space if you go for an XJ L like this) and a truly wicked turn of pace at the merest dab of throttle. Use all of the available power and you’ll hurtle towards the horizon with indecent pace, and unlike most luxury saloons, there’s satisfaction to be had from shuffling through the eight gears yourself. The only downside is a relatively hushed soundtrack, from the interior at least. The XJR is sure to rectify that, if its Jaguar XKR-S engine buddy is anything to go by.

Jaguar quotes a combined 24.4mpg; after a mix of motorway cruising and quite enthusiastic driving the trip computer showed us a figure just 0.1mpg shy. Even allowing for a typical margin of error, that’s damn impressive. Even so, the Supersport is a marginal choice, accounting for around five per cent of XJ sales. Still, if it’s good enough for James Bond and M to make a run for it in Skyfall…