Jaguar has replaced the old 5-litre V8 engine in the Jaguar XJ with a new supercharged 3-litre V6, which will also appear in the forthcoming F-Type sportscar 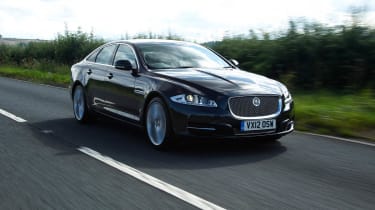 Jaguar’s new supercharged V6 engine, sampled here for the first time in the XJ where it replaces the naturally-aspirated 5-litre V8. The same motor is also set to power the forthcoming F-Type roadster and coupe. Jaguar acknowledges that sales of the supercharged XJ will be limited; it’s been created for markets like China and Russia where buyers get penalised for bigger-capacity engines.

The V6 engine has been developed from Jaguar’s V8, with all-alloy construction and its cylinder block strengthened with cross-bolted main bearing caps. It features both variable timing on inlet and exhaust and direct injection. Intake air is delivered by a twin-rotor supercharger that sits in the vee between the cylinder banks. The XJ gets a 335bhp version, but a brawnier 375bhp will also be offered in the F-Type.

The XJ has also been given some other mid-term revisions, including suspension tweaks, more kit (including standard DAB radio) and an optional 20-speaker Meridian audio system that delivers 825W of sound.

The supercharged V6 is slightly down on power and torque compared to the old V8, losing 45bhp and 48 lb ft. But the arrival of a new eight-speed autobox in place of the old six-speeder helps to mask the performance deficit. The V6 does a decent V8 impression too. It feels just as flexible as the larger engine with a progressive and consistent surge of power whenever you want it. Sitting in the relaxing environment of the XJ’s cabin you’ll barely notice the missing tenths on the performance numbers.

Despite the suspension revisions the XJ still feels firmer than most of its luxury rivals. As before, it puts in an impressive dynamic performance and handles remarkably well for something this size – but you’ll still feel lumps and bumps in the cabin in everyday use.

90 percent of British XJ buyers opt for the 3-litre diesel engine, and the new V6 supercharger is unlikely to change that – not least as it’s over £9000 more expensive than the oil-burner spec-for-spec and is only 0.5-sec faster for the 0-62mph benchmark.

It’s a decent engine, but in the UK it will definitely remain a minority choice.

The official combined fuel economy is 30mpg, which is pretty decent for something this size running on petrol. Company car users will be whacked by the 224g/km CO2 rating, though.