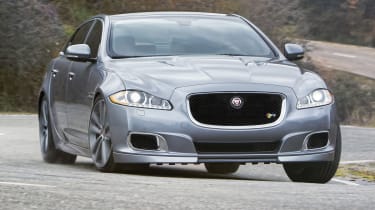 The new Jaguar XJR saloon has been unveiled at a busy New York motor show for Jaguar-Land Rover. The big cat uses an adapted version of the Supersport’s 5-litre supercharged V8 (as seen in the XKR-S and XFR-S) producing 542bhp and hustling the big XJ to 60mph in 4.4sec. The transmission is a ZF eight-speed automatic, custom tuned for the XJR and including corner recognition technology, which senses when you’re steering and holds its gear for optimum exit speed. Both the stability control and differential get a special sporting calibration to better deal with the increased grip and power of the R. An adaptive electronic suspension monitors driving conditions with the ability to adjust dampening up to 500 times per second.

Inside, the XJR is plushly appointed and can be specified with an 825W, 18-speaker Meridian sound system. A new front splitter, rear spoiler, unique bonnet vents and ‘Farallon’ forged 20in alloy wheels serve to further differentiate the R as the new halo XJ. Jaguar says that this is much more than a retuned Supersport, with a notable step up in dynamic ability reported by engineers. The Jaguar XJR has been priced at £92,335, just £600 more than the 503bhp Supersport that sits below it. That suggests a price cut for the Supersport, at the very least.