The 575 is not dramatically different from the regular XJR, but this is a fine car 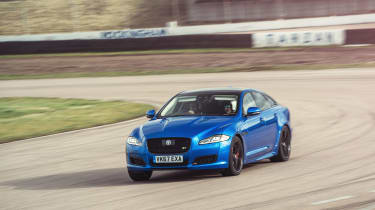 To keep its flagship model fresh and competitive, Jaguar has updated the XJR with a small range of detail improvements. The changes to the big saloon aren’t significant enough to dramatically alter the car’s attitude, or even make it feel as modern as its newly released rivals, but they intensify what makes the powerful eight-year-old limousine so charming. The XJR is perfecting the art of growing old disgracefully, in a very promising fashion.

As the name implies, the venerable 5-litre supercharged Jaguar V8 gets a slight power hike from 542bhp to 567bhp (575PS), with torque rising to 517lb ft from a previous peak of 502lb ft. Granted, they’re only minor improvements on a car that weighs nearly two tonnes, but the new 575 clearly isn’t short on performance, particularly given its size. The 0-62mph sprint takes 4.4sec, and the top speed is quoted as being 186mph. The only transmission choice is, as ever, the eight-speed torque converter auto that suits these cars so well. 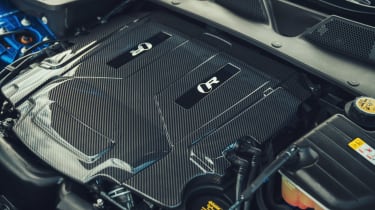 In essence, the XJR 575 is a fairly mild makeover of an ageing car. In addition to the power increase there’s a subtle bodykit consisting of a lower front air dam, a revised rear spoiler, new side sills and a choice of either gloss black or dark grey 20-inch wheels. On the inside, 575s have diamond stitching on the sports seats along with adjustable bolsters; there’s a broad swathe of glossy carbonfibre running through the dashboard, plus there’s a rather naff ‘575’ logo on the backrest of each front seat and in the centre of the ‘Riva Hoop’ – the panel that wraps around the top of the XJ’s cabin.

For me, these ‘embellishments’, along with the optional bright blue paint, don’t do the XJ any favours, but then I’ve never really understood the X351 XJ’s styling anyway. You may well, of course, disagree entirely. One positive new arrival – across the XJ range – is the new Touch Pro infotainment system with a 10-inch screen, and it’s a marked improvement on JLR’s previous efforts. 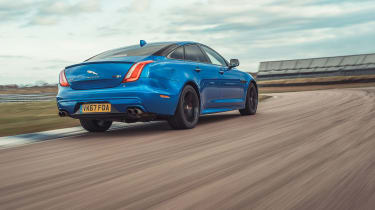 Yes, the 575 is fundamentally a limo, but once you’ve shut the driver’s door behind you that’s all but forgotten. It’s a brilliantly cosy but contemporary driving environment up front, and easily Jaguar’s finest interior to date – not just in terms of quality perception but also the design, which is still pleasingly like nothing else in its overall architecture. Immediately you can sense an excellent driving position, complemented by a fine, thin-rimmed leather steering wheel, all putting the driver in the mood for far more than just chauffeuring duties.

Up ahead lies one of the best installations of Jaguar’s 5-litre V8 so far. In the ‘normal setting’ the V8 is as demure as the XJ itself, whirring away as it quietly persuades the XJ’s bulk to get a move on. Select Sport and it growls with a polished menace, and thankfully without the crass ECU-induced burbles and over-wrought exhaust blare of an F-Type. The ‘box is finely calibrated: reserved in normal, energetic in Sport, but most of all crisp in manual mode via paddles, which is how I spend most of my time driving it. To do so feels natural, which is odd in a limo, but a pointer to things to come. The brakes deserve a special mention, too, for their heroic stamina in the face of serious provocation and mass momentum.

At first you notice the cabin’s isolation from engine, road and wind noise, all of which are superb, which means the 575 eats miles with disdain. And while modern XJs don’t ride with the same unflustered elasticity as those from previous decades, it’s still a very comfortable way to travel, and of course, the trade off is a dynamic sharpness that is all but unmatched in this class. 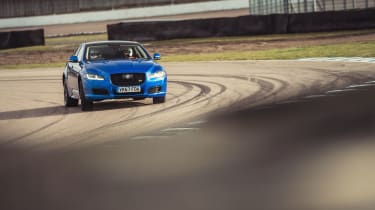 What makes the 575 so special is its ability to effectively shrink around the driver, it’s a 5130mm-long limo and yet soon enough you’re driving it around like some compact sports saloon on steroids. Although XJs received an electro-mechanical steering rack in 2015, replacing the a hydraulic unit, altering the car’s direction still feels very precise; it’s natural and well-weighted, and that’s a major contributing factor to immersing you in the driving experience.

Rather than unleash a terrifying amount of tech to make a big car do things it really shouldn’t be able to do, the 575 relies instead on a more traditional recipe of feedback, chassis balance and depth of character to not only entertain, but to draw you relentlessly into the experience. It’s relatively easy to get to the stage where you’ve such confidence in the car, you’re starting to purposefully exceed the limits of the rear tyres, accessible with just one press of the stability control button. Driven thus you probably won’t get many miles from a set of rears in a 575, but you will giggle a lot. I did. It’s an absurd sort of behaviour for a large, comfortable limousine, but it’s there for the taking, and I enjoyed pretty much every mile.

A race circuit is not the ideal habitat 1875kg limousine, even one with 567bhp. However, just as the 575 is surprisingly agile and wieldy on the road, it’s unexpectedly proficient on track, too.

On wide, open tarmac you aren’t really totally aware of the huge speeds the XJR is able to reach, until you try and slow for a corner. The car’s huge mass means you need to reduce your speed significantly to get it turned in, but the brakes do a fine job of repeatedly trimming the car’s rapid pace.

With respectable but not groundbreaking entry speeds, the XJ resists roll remarkably well meaning you can place it easily on track, effortlessly maintain smooth inputs and stick to the racing line through every corner. However, the security afforded by the luxurious interior often masks just how fast you’re going and with the 575’s chassis balance that really inspires confidence, it is very easy to carry too much speed into a bend. Excessive entry speed results in the front pushing on and the whole car starts to feel scrabbly and out of its depth. A slow in, fast out approach definitely suits the 575.

Oversteer, as you might expect, especially on wet or damp tarmac, is never far away. The XJ’s long wheelbase, clear steering and relatively little roll makes it beautifully easy to control any slide that might occur. But this willingness to oversteer adds a useful degree of influence when navigating a track, rather than the ability to simply cook your rear tyres. Adjusting the car’s line, or trying to quell any understeer that might occur if you’re too ambitious on corner entry, is easily done with a touch of the throttle.

The XJR 575 is unlikely to be anyone’s first choice of trackday car and very few will find their way onto the tarmac of Silverstone, Spa or even the Nordschleife. But anyone who is brave enough to venture onto a circuit in the big Jag will be pleasantly surprised. – Will Beaumont

£93,710 gets a XJR 575, a figure that we fear will rapidly diminish once the car is driven out of the showroom. That’s a shame, for the 575 really commands its own niche. More entertaining and practical (it seats five, after all) than a Porsche Panamera (although not a Sport Turismo on the latter point), an S63 AMG may well pulverise the big Jag in a straight line, but you’d not choose to actually drive one for fun like you might this car.

No, the 575’s main problem is that it’s a type of car that’s out of fashion, and while it seats five in comfort its luggage area lacks entirely the practicality of an Mercedes-AMG E63 S Estate, or a Porsche Cayenne Turbo – rivals on price and performance. If only Jaguar could fashion everything that’s so right about the 575 into a more relevant package – shooting brake, coupe, whatever – it might really be onto something.