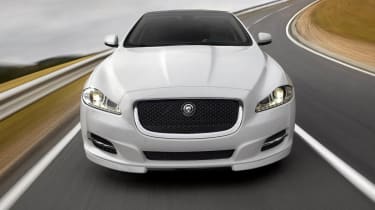 The updated 2013-model-year Jaguar XJ luxury saloon, here in its most popular, 3-litre V6 diesel guise. It costs from £56,260, while the exterior Sport Pack exhibited by our test car adds an additional £1645.Technical highlights?

The new XJ debuted in 2009 to critical acclaim, so Jaguar hasn’t had to rewrite its recipe for this mid-life spruce-up. The bold styling remains untouched, with small changes under the skin: the six-speed automatic gearbox is replaced by an eight-speed transmission, stop/start is standard and there are slight suspension tweaks, with improved passenger comfort the focus. An 825-watt Meridian stereo is the new premium audio option, replacing the Bowers & Wilkins set-up of before.

The Sport Pack adds 20in Venom alloy wheels, red brake calipers, a subtle body kit and a small rear lip spoiler, but doesn’t change the XJ’s dynamics.What’s it like to drive?

If you want an agile saloon that reacts deftly and belies its luxurious kerb weight, this is it (though the XJ’s aluminium structure means its 1.7 tons are actually a few kilos down on the smaller, steel XF). While many of its rivals are good to drive, none manages to combine ride comfort and agility with the aplomb of the XJ. It’s a very fluid car to drive quickly, and given the enormous 442lb ft punch of its turbodiesel engine, it’s an easy car to do so in. Typical Jaguar complaints of uncommunicative, overly light steering and a lack of rear grip in less than ideal conditions remain, though the XJ’s natural balance means you can work around these.

It’s a quick car, this, and the twin-turbo diesel engine even sounds good, keeping up with its rorty-sounding equivalents in BMWs and Audis and not punishing you for choosing diesel over petrol. The gearbox’s eight speeds do feel excessive, and it’s easy to feel a little muddled in manual mode, but select Drive or Sport and the XJ shuffles its ratios adequately. And the extra two cogs no doubt assist the efficiency numbers, fuel economy and CO2 emissions rated at 47mpg and 159g/km respectively.

If you’re in the minority who won’t accept diesel power and want to stay petrol, you have two choices, both of them supercharged. The wondrous, 503bhp V8 Supersport still tops the range, while a new 3-litre V6 model – with an engine related to that in the Jaguar F-type V6S – comes in with the 2013 model year. You can read a review of that here.