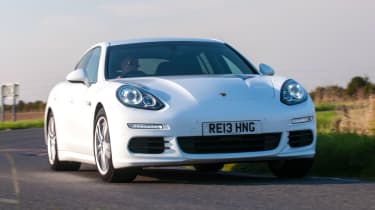 The new Porsche Panamera Diesel. The sports saloon has had its first major refresh since its 2009 release date, and the Diesel is one of eight models to be given a stylistic refresh straight out the facelift guidebook, with tweaked headlights (all LED units optional), sharper bumpers and a new engine. The Panamera Diesel retains the 247bhp 3-litre V6 oil-burner it has always used, though a bit of tickling has yielded a claimed 1.3mpg increase in fuel economy (to 44.8mpg), taking its potential range on one tank of fuel to 800 miles. It’s the cheapest Panamera to buy, starting at £62,922.

The 247bhp/406lb ft diesel engine is sourced from Audi, and is mated to an eight-speed tiptronic automatic gearbox, while most other Panameras use a seven-speed PDK twin-clutch ‘box. There’s just one choice of transmission, and happily it’s rear-wheel drive. With that Ferrari 458-besting torque figure available from below 2000rpm, there’s certainly potential for fun when a wet roundabout stoves into view. The top speed is 151mph, while the 0-60 time sits under seven seconds.

If you’re wondering why Porsche is sticking with this engine as Audi slots bi-turbo engines in new A6, apparently the super-torquey motor won’t fit under the Panamera's low bonnet line.

Highlights of the Panamera’s 2013 update include the introduction of a host of driver aids, with the inevitable addition of lane departure warnings, blind spot monitoring, ‘overhead view’ parking and active cruise control. There’s also a smartphone app – called Porsche Car Connect – which allows remote control of the heating and locking and the ability to find where the car is parked in an unfamiliar city.

Very accomplished. It’s uncannily quiet and smooth during restrained acceleration and cruising, but warbly and bassy under higher throttle loads with a more appealing soundtrack than the new V6 petrol engined Panamera S. There’s plenty of shove and the claimed 0-60 time looks a wee bit pessimistic. In the real world, you’ll rarely need a car faster than this.

Of course, it reaches its 5300rpm rev limit quickly and you’ll rarely feel the need to extend the engine that far anyway. It’s impressive in pace but surprisingly good soundtrack aside, unsexy in the way it executes it. At 1880kg this is one of the heavier Panameras you can buy, but it belies its stocky weight figure with reasonably sharp handling and good balance. With the adjustable PASM dampers of our test car in Sport mode it offers an impressive mix of comfort and control, with softer and harder options should you so require it.

It’s a talented car, and if your heart is set on the Panamera, this is – whisper it – surely the one to buy if you can live without going bonkers-fast. Two thirds of the circa1000 Panameras sold annually in the UK are Diesels, and lack of ultimate thrills aside, it’s easy to see why.

At £62,922, put bluntly, it doesn’t. A BMW 535d nails it for performance and economy. However, the Panamera’s cabin is of Bentley quality, and it is a sensational European touring machine. The trouble is, you get the feeling that this is car Porsche felt it had to make, rather than actively wanted to make. Porsche's official line is that 'diesel should not be a performance derivative, and we will never develop our own engines, preferring to buy them from Audi instead.'

While the Diesel is faraway the Panamera of choice for British buyers, the focus of the updated car’s launch has been the new E-Hybrid variant. Its headline figures – a combined 91.1mpg and 71g/km CO2 emissions alongside a 5.5sec 0-62 sprint – are hugely impressive though the former will be inevitably hard to match in real life, and at £88,967, it’s a technology-rich luxury car rather than the low running costs hero of the Panamera range.