Considering the old model was hardly a disaster, and that Porsche has managed to produce some very competent SUVs, it comes as no surprise that the new Panamera is an extremely competent saloon car. It’s a big, heavy beast but it controls its heft with aplomb and it’s astoundingly agile. It might not be a sports car, even in Turbo guise, but it certainly has the ability to really appeal to proper drivers.

> Read our review of the Porsche Cayenne

A selection of powerful, torquey engines and a new eight-speed double-clutch gearbox help shuffle the Panamera along at a decent pace, too.

The most significant change, however, is the way the new car looks. Gone is the awkwardly applied Porsche design language and the old too narrow, too heavy-looking proportions. This time around, the Porsche family look has been adapted far more successfully and the new Panamera is stylish, elegant and looks like the 911’s dignified older brother, rather than the village idiot. A fancy three-piece retractable rear spoiler adds some drama, and even though its movement is a touch over the top, we still can’t get enough of watching it unfurl.

Arguably, the estate version of the Panamera, the Sport Tourismo, looks even better than the regular car. You don’t get an elaborate retractable wing, the rear spoiler only moves by eight degrees when the car’s travelling over 106mph, but its bulkier rear-end balance its proportions nicely. What’s more, it drives just as well as the Panamera saloon. 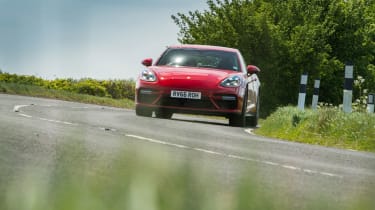 The most basic Porsche Panamera in the model line-up is rear-wheel drive and packs 325bhp, for a starting price of under £70k. Part with a few thousand more and you’ll be afforded four-wheel drive, but with no extra power.

More power is available, of course, but it’s costly in terms of fuel and list price. The jump from the Panamera 4 to the 4S takes you to about £90k with no options. The more eco-friendly 4 E-Hybrid with 456bhp undercuts the aforementioned by about £4k. The Sport Turismo (estate) body can be secured onto the Panamera 4, 4S, 4 E-Hybrid and Turbo drivetrains.

The cheapest eight-cylinder model, the 4S Diesel, costs £93,379. The 542bhp Turbo model costs £115,100, and that gets Porsche Active Suspension Management (PASM) and air suspension as standard.

The Turbo S E-Hybrid is almost £150k. It pairs the same V8 in the Turbo with a 100kW electric motor producing a total 671bhp. Extra grunt warrants uprated stopping power – ceramic brakes are standard –  as well as: Porsche Torque Vectoring (PVT), an automatically-adjustable electromechanical anti-roll bar (PDCC) as well as the PASM and air suspension on the Turbo .

The driver aids do filter down the range, although they'll come at a cost. It is over £1500 for the air suspension and PASM system, while the PVT and PDCC (not available on the rear-wheel drive Panamera and the basic 4) comes as a package together and costs more than £3.5k.

The Sport Chrono Package includes an analogue lap timer mounted in the centre of the dash and a dial on the steering wheel to allow the driver to switch between different driving modes. It also includes a launch control function that reduces the Panamera’s 0-62mph time, no matter what the engine, by 0.2sec.

For the first time, rear-wheel steering is available on the 4-door Porsche, allowing the back wheels to turn by as much as 2.8 degrees in the opposite direction to the front wheels below speeds of 31mph, to improve mobility and manoeuvrability. Then, at higher speeds, the rear wheels follow the fronts to aid stability. It costs an extra £1536. The Sport Tourismo – only available as a 4, 4S, 4 E-Hybrid and Turbo – costs an extra £3728 over the saloon.

While the reagular Panamera doesn't actually look much like a saloon, all of its rivals have a more conventional three-box silhouette. BMW’s brand new M5 will look to dominate the segment as its predecessors have. With four-wheel drive channeling 592bhp to the road, only the Panamera Turbo S E-Hybrid boasts the spec sheet to outpunch the M5.

> Read our review of the Mercedes-AMG E63 S here

The Panamera’s biggest challenge also comes from Stuttgart, the Mercedes-AMG E63 S. At nigh-on £90k it’s simialry priced to the new M5 and quite some cheaper than the Panamera Turbo, yet it has more power than both with 604bhp and, thanks to all-wheel drive traction, it accelerates faster too. The E63 S will hit 62mph from a standstill in just 3.4sec. What’s more, the new E63 is wonderfully refined inside and real very capable on the road.