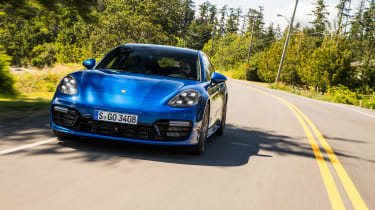 No one knows why it has taken Porsche so long to introduce the estate (sorry, Sport Turismo) version of its Panamera saloon, but five years after its Paris Motor Show debut as a concept car we’ve finally driven Porsche’s first family estate car.

Five derivatives are offered from launch, from the entry point Panamera 4 through to the Turbo with a 4S, 4S diesel and S E-hybrid completing the line-up with prices starting from £74,652 and rising to £118,828 for the Turbo. All derivatives of the Sport Tursimo are available to order now. 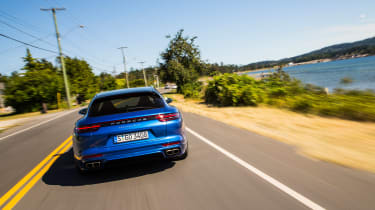 Initially only available with Porsche’s four-wheel drive system, the Sport Turismo line-up is expected to expand to include an entry level rear-wheel drive V6 turbocharged model, with a more focused GTS and the monstrous Turbo S E-Hybrid also expected to follow.

From the B-pillar back everything is new to the Sport Turismo in terms of design. Overall length is 5049mm with a wheelbase of 2950mm, both of which are identical to the saloon.

With a single piece tailgate manufactured from aluminium the Sport Turismo carries only a small weight penalty over its saloon counterparts, with kerb weights ranging from 1880kg for the 326bhp V6 to 2035kg for the Turbo, a circa 30kg weight increase over the saloon.

Perched on the Sport Turismo’s roof is an adaptive rear spoiler, the first for an estate car says Porsche. At speeds below 106mph it stays in its most retracted position of minus-seven degrees, at speeds above this it rises through eight degrees to plus-one degree to deliver up to 50kg of additional downforce depending on your speed. If the optional panoramic roof is open and you are travelling above 56mph the spoiler adopts an angle of 26 degrees to reduce wind noise inside the cabin. 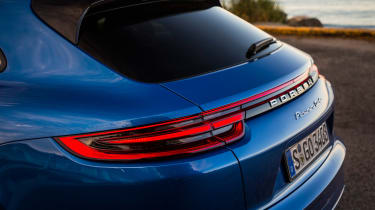 The entry point Sport Turismo 4 is equipped with steel springs and Porsche’s active damper technology, PASM, with the 4S and Turbo models are fitted with air suspension and PASM damping as standard. All models come with iron brakes, with six- and four-piston calipers fitted front and rear respectively, though the Turbo is equipped with larger 410mm front and 380mm rear discs compared to the V6 engined cars’ 390mm and 365mm discs. Larger, eight-piston ceramic-composite PCCB stoppers are available across the range as an option.

Across the Sport Turismo range Porsche has fitted Porsche Traction Management four-wheel drive as standard and its eight-speed double-clutch PDK gearbox. Both the V6 and V8 engined models share the same ratios except for the final drive. Rear-wheel steering is also offered across the line-up as a cost option, so too is Porsche Dynamic Chassis Control. 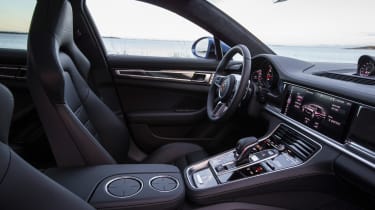 Inside the new Panamera Sport Turismo existing owners of the current saloon derivative will feel immediately at home from the driver’s seat, with Porsche’s latest Advanced Cockpit system taking pride of place. Look over your shoulder, however, and you’ll spot a Panamera first with the option of three rear seats in place of the traditional pair of individual chairs – though they are still available as an option.

Both V6 engines are equipped with Porsche’s variable valve timing technology, but it’s only the V8 that also features cylinder deactivation technology to improve fuel efficiency.

At its launch there are five engines available with the Panamera Sport Turismo, all with PTM four-wheel drive and an eight-speed PDK gearbox. 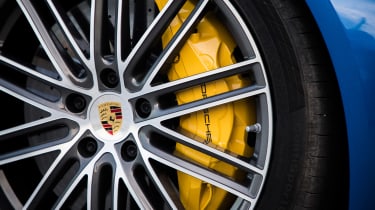 There is also a 4.0-litre, twin-turbocharged V8 diesel available. It produces 416bhp, 627lb ft and will crack 60mph in 4.3 seconds and top 176mph. The ‘cleanest’ model in the line-up will be the 4 E-Hybrid powered by a 2.9-litre, twin-turbo V6 engine producing 325bhp and 332lb ft, supplemented by a 134bp, 295lb ft electric motor. This plug-in Sport Turismo will crack the 60mph sprint benchmark in 4.4 seconds and top 171mph, while also offering an electric driving range of up to 32 miles.

Naturally the Sport Turismo Turbo puts all to shame in the performance stakes. Not only does it produce at least 100bhp more than the most powerful V6 turbo with 542bhp, its 568lb ft of torque is 236lb ft greater than the entry-level model and it produces 271bhp/ton. Little wonder Porsche claims it can reach 60mph in just 3.6-seconds (3.4 with Sport or Sport Plus), crack 100mph in 8.2-seconds in Sport Plus mode and top 189mph.

We headed straight for the range topping Panamera Turbo and are happy to report it drives so closely to the regular saloon that only a long look in the mirror will remind you this is an ST.

Its 4.8-litre twin-turbo V8 doesn’t go to the bother of troubling itself with the weight premium that amounts to 5kg more than carrying a sack of spuds in its flat-floored boot. 550bhp and 536lb ft has that affect on mass. The eight-speed PDK gearbox has that duality of being a seamless shifter when grinding through traffic and delivering millisecond precise changes when required. When you’re really on it the downshifts can be a little slower than you require but the shift comes just in time, rather than leaving you a ratio higher than ideal as you roll off the brakes and back on the throttle. 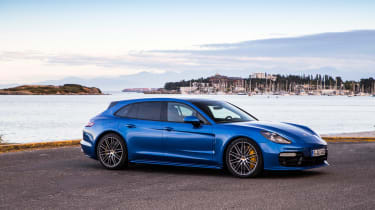 As with all current Panameras, the steering is best when the optional adaptive anti-roll bars (Porsche Dynamic Chassis Control) aren’t fitted. There’s a linear and clear action to how the EPAS system reacts to inputs. The weight is always consistent and Porsche is one of the few who manages an electric steering system that feels natural in how it performs. Unless PDCC is fitted. Then, it all goes to pot and reverts to early EPAS type with a lack of consistency in terms of weight and feedback. PDCC also results in a steering wheel that constantly fidgets in your palms.

Porsche’s air suspension has continuously evolved for the better, too. Its ability to control the Panamera Sport Turismo’s mass is otherworldly, giving the impression the car is from a class below and hauling 500kg less. With the standard PASM dampers set to Sport mode the ride is still on the acceptable side. Only the largest of imperfections in the surface cause the body to shudder and the standard 20-inch wheel to make its size felt.

Away from the dynamic ability of the new Panamera Sport Turismo and looking deeper into its ability as a grand tourer and there are few that can touch it for opulence, comfort and a sense of occasion. Unlike its rivals from AMG and Audi it doesn’t feel the need to shout about its credentials, preferring instead to go about its ability to cover huge ground at considerable speed in ultimate comfort while chatting happily to the driver in the most discrete way imaginable. 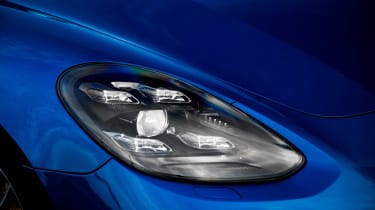 Rear seat passengers will appreciate the additional headroom of the ST and rear cabin space is lost some of the claustrophobic properties of the saloon. But the rear bench seat is a bit of a misnomer. At a push it will seat three, but only if the third is a child and a short one at that. It’s a fully blown three-seat in the back as much as a 911 can seat two adults in the rear.

As with the Panamera saloon, the Sport Turismo straddles its rivals in terms of price and performance, and in estate guise size too.

Audi’s ageing, but endearing RS6 and RS6 Performance join the party at 552bhp and 597bhp respectively wearing £81,430 and £88,345 price tags. With BMW having no plans to introduce an M5 estate and Jaguar unlikely to produce an XF R version of its new XF Sportbrake, let alone an XF SVR, the Germans still have the super-estate car market all to themselves. 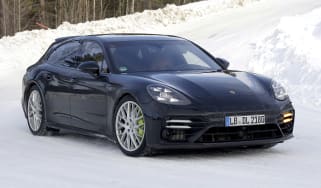