Despite having a smaller capacity, just 2.9-litres, the V6 in both the 4S and 4 E-Hybrid produces more power and torque than the motor in the basic Panamera. That’s because the 4S’s engine is newer and more sophisticated and features two turbocharged mounted within the banks of the two cylinders to create a hot-V engine. It makes 434bhp from 5650 to 660rpm and 406lb ft of torque between 1750 and 5500rpm. In the 4 E-Hybrid the hot-V V6, when supplemented by a 100kW electric motor, makes a total of 456bhp and 516lb ft of torque.

The V8 in the 4S Diesel, just like the new 2.9-litre V6, is also a hot-V engine. It is the same twin turbocharged 4-litre diesel motor found in Audi’s SQ7. But, unlike the big SUV, the Porsche doesn’t have the electric supercharger to help eliminate turbo lag at low revs. With one fewer compressor, the engine in the Panamera can’t match the 429bhp and 664lb ft of torque that the Audi makes. Instead, it produces 416bhp and 627lb ft of torque. 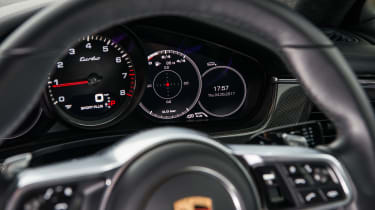 > Read our review of the Audi SQ7 here

The Turbo is fitted with a twin turbocharged 4-litre petrol V8. As you’d expect, even with the same amount of turbos and the same capacity, this engine makes more power than the diesel – over 120bhp more in fact with 542bhp. It can’t match the diesel’s torque output though, and the Turbo makes do with 568lb ft of torque.

The Turbo S E-Hybrid will use the same V8 as well as a 100kW electric motor to push those figures up to 671bhp and 627lb ft of torque, exactly same as the 4S Diesel.

If that all seems too complicated, and there are a too many options for you, then you’ll be pleased to know there is only one choice of gearbox. Every Panamera, from the diesel to the Turbo S E-Hybrid uses an eight-speed dual-clutch transmission. Changes are fast without being jerky, and in full-auto mode it can be a little clunky at low speeds but it’s smooth when out of town or on a motorway.