The old Panamera was not a pretty or elegant car. It borrowed enough of the marque’s desgn DNA to look like a Porsche, but not one that exuded sophistication or sportiness. This new version, however, looks far better. Its taut lines stop it looking flabby, despite it being relatively large (6mm wider, 34mm longer and 20mm taller than the previous model) and proportions make it look like a four-door 911. 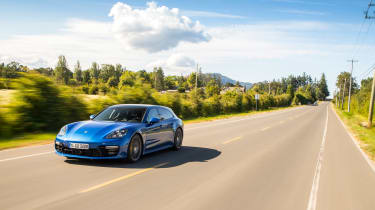 The three-piece retractable rear wing, that folds out to from the centre when you exceed 80mph or select one of the sportier driving modes, is utterly mesmerising. Its action is complicated yet smooth, and it’s a good job you can’t see it in the mirror from the driver’s seat or that could be dangerously distracting.

The Sport Turismo, which we’re yet to drive, is an estate version of the Panamera. Much of what makes the standard car so handsome remains. However, with a rear end that’s not as steeply raked, it’s even more practical.