The Panamera is an undeniably impressive machine. Yes, it’s got the sports car-rivalling performance but it's not just fast, Porsche’s big saloon is also enjoyable to drive. The seating position is low and there’s enough movement from the adjustable steering column to move the wheel to exactly where you want it.

It doesn’t ride like a luxurious barge, instead there’s a tension to the way it deals with a road. However it’s far from uncomfortable, the strong structure doesn’t allow any nasty creaks, rattles or shudders.

The taut ride doesn’t try to disguise the Panamera’s size or weight, considering its enormity that would be practically impossible. Instead, the Porsche saloon manages its weight exceptionally well with great body control, and that endows it with an intent rarely seen in a car of this sort. 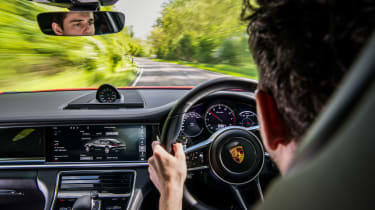 Its steering is heavy, especially around town, and so is the weight of the throttle. Such substantial controls emphasise that the Panamera isn’t some effortless city car, but as they’re easy to adapt to, they’re far from a hindrance. This solid feel, combined with its well-appointed cabin and high-speed performance, means the Panamera does a great job of being comfortable GT car.

The steering rack is quick and precise; there’s a significant amount of front grip too and you can direct the Panamera with remarkable accuracy. You do feel the car’s bulk under when trying to slow it down, but the brakes are more than up to the task on the road. Such a reliable front end allows you to carry huge speed into a corner, so the full force of the brakes isn’t called upon quite as often as you might think.

Once turned in neatly the Panamera gives you the confidence to jump on the power early and balance the car with the throttle through to the exit. The 4S Diesel’s on-paper performance gives the impression there’d be more than enough oomph to indulge your wild side, but its throttle response is poor and its V8 feels flat. Sport and Sport+ mode improves the way the engine feels, but it still isn’t sharp enough to completely win us over. 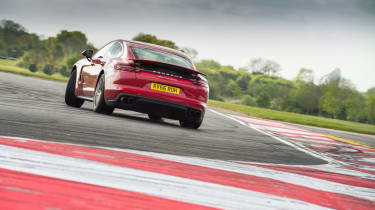 The 4 E-Hybrid is much more eager, even from low down in the rev range. However, a lot of the time its V6 sounds bland and then thrashy as the revs increase. Its built-in regenerative braking system gives the brake pedal an extremely odd feel; it shuffles up and down beneath your foot as the system juggles between conventional brakes and the regen. Blending those two methods of braking seamlessly is a fiendishly difficult thing to do and, as it stands, Porsche is yet to master that art with this car.

> Read our full review of the Porshce Panamera 4 E-Hybrid

The Turbo is the one that feels most like a Porsche, it’s a truly fast car. Its V8 emits a menacing grumble and pushes the Panamera along at a startling rate. It responds instantly to throttle inputs and there’s real force right up until its 7000rpm limit.

Its grunt also makes it more malleable in a corner, and liberal use of the throttle adds just a slight degree of attitude as the tyres lose their fight with the tarmac. Feeling the four-wheel drive system hunt for grip, the tyres clawing away at the road, the Turbo gives the impression it’s like a less extreme, less mechanical Nissan GT-R. It’s not as raw, exciting or quite as involving as the Japanese sports coupe, but for a four-door saloon to behave in that manner is deeply impressive.

Just as the acceleration times aren’t affected by the extra weight of the Sport Tourismo’s estate body, neither is its handling.

The Panamera shares elements from its sports car siblings, with great weighting to its controls, a real agility, unshakable composure and masses of grip. However, it doesn’t feel like a true sports car, instead it creates a character all of its own – one that’s less delicate but still involving and enjoyable.

The only Panameras that we’ve tried have been fitted with rear-wheel steering. Although we doubt all of the Panamera’s agility and composure is down to the system we suspect it has improved the car’s natural athleticism. And yes, £1536 is a lot of money, but it is only a small proportion on the cost of even the cheapest Panamera.

We’re yet to drive the top of the range Turbo S E-Hybrid, but we were granted a passenger ride. Here’s what we thought: ‘After an Adam’s Apple swallower of a launch-controlled launch from the end of the pit lane, the thing about the Turbo S E-Hybrid is that it simply never lets up. Thrust is brutal, instant and always available, the real-time dynamic telemetry info on the head restraint TFT displays a dizzying concert of 1g+ readings as Lars leans on the car’s frankly outrageous grip, traction and braking and uses its two-ton bulk to drive straight across many of the circuits red and white kerbs without upsetting its stability and composure in the slightest. Sometimes, it seems, being heavy has its advantages. And all this in undeniable comfort while being serenaded by a basso profondo soundtrack beautiful enough to make an American muscle car owner weep.’ – David Vivian, contributing editor