Appropriately, as it is a Porsche, there’s no such thing as a slow Panamera. Even the most basic rear-wheel drive model makes it to 62mph in 5.7sec, or 5.5sec when equipped with Sport Chrono that includes launch control. Add four-wheel drive and you can trim that time down by 0.2sec. 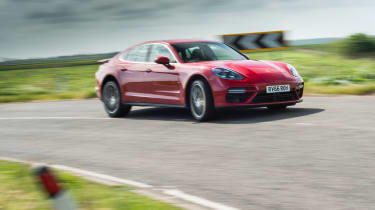 The petrol V8 turbo models are more extraordinary still. The Turbo breaks the 4-second barrier with a 0-62mph time of 3.8sec (3.6sec with launch control, naturally). The Turbo S E-Hybrid will be quicker still when it's launched, Porsche claims it will hit 62mph in 3.4sec. Like the 4 E-Hybrid, the Turbo S will come with launch control as standard.

Unlike many German saloon cars, the Panamera is not limited to 155mph. Instead the maximum top speed ranges from 162mph for the 4, to 193mph for the 4 E-Hybrid.

Surprisingly, despite an approximate 30kg weight increase over the saloon, the Sport Tourismo models are no slower to 62mph than conventional Panameras with the same drivetrain.