The new Porsche Panamera’s cabin is among the best of any car, anywhere. It’s the first of the brand’s cars to feature a sleek, clean one-piece plastic centre console that removes the masses of buttons that litter the area near the gear lever on most modern Porsches. This design has already been adapted for the new Cayenne and, eventually, it will appear in Porsche’s sports cars too.

There’s a 12.3-inch touchscreen in the middle of the dash, its predominantly black and white interface is replicated on the glossy, touch-sensitive centre console. It looks sleek, modern and cohesive, but with no individual buttons to press you do find yourself deliberately peering down towards it whilst driving to ensure you are in fact cranking the heated seat up rather than switching into a firmer suspension mode. There is a satisfying clunk when you do press the entire panel – it only does this when you’re finger is in the correct place to operate something, accidentally touch a ‘dead’ area and the panel doesn’t move – but with no physical edges to the button areas you could press anything without dedicating some attention to where you’re poking. 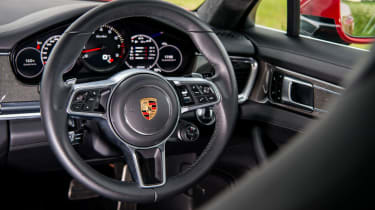 As well as looking great, the quality of the materials feels high and there’s never any sense that it hasn’t been put together with the attention to detail that’d you’d expect of a luxury brand.

The only real downside to the Panamera’s interior is that every time you touch the shiny new panel you leave visible fingerprints on it, and that doesn’t look very neat.