Porsche Panamera 4 E-Hybrid review - The diesel does it better 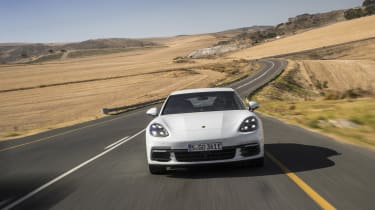 The Porsche Panamera 4 E-Hybrid mates a twin-turbo V6 petrol engine with an electric motor to combine performance and efficiency, according to Porsche. The plug-in hybrid drivetrain generates 456bhp in total and in electric mode the car will cover 31 miles on a full charge.

The hybrid model is designed with built-up areas in mind, which means those Panamera buyers who prioritise efficiency over longer distances will be better served by the 4S Diesel. According to the New European Driving Cycle the 4 E-Hybrid returns 88.5mpg and emits just 56g/km of CO2, but those figures apply only to short, low-speed journeys that start with a fully charged battery.

The 2.9-litre combustion engine returns 326bhp, which is bolstered by the electric motor’s 134bhp. Peak torque is a massive 516lb ft, available almost immediately. Drive is sent to all four wheels via a new eight-speed twin clutch gearbox.

The electric motor and battery are located beneath the boot floor. The battery can be charged either by plugging into a conventional household socket – with a charging time of 5.8 hours – or on the go using the combustion engine and regenerative braking.

In fact, all light braking inputs – defined by Porsche as 0.3 longitudinal G or less – use the electric drivetrain rather than the conventional brakes to slow the car. Only when the driver presses the brake pedal harder do the brakes themselves begin to operate.

The standard-fit Sport Chrono Package includes a rotary switch on the steering wheel, familiar to other Porsche models, that allows the driver to select various drive modes – E-Power, Hybrid Auto, Sport and Sport Plus. On top of those modes, the E-Hold setting conserves the current state of charge for use when you arrive at a city, for instance, while E-Charge mode uses the V6 engine to quickly charge the battery. 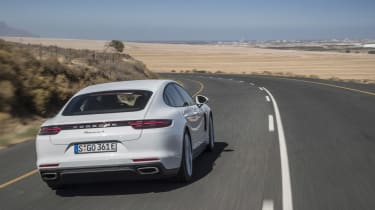 The new Panamera’s cabin is among the best of any car, anywhere, with a sleek, modernist design, very high quality build and top-notch materials. The one-piece plastic centre console section looks good – at least until it becomes smeared with greasy finger prints – but with no individual buttons to press you do find yourself deliberately peering down towards it whilst driving to ensure you are in fact cranking the heated seat up rather than switching into a firmer suspension mode.

Despite the standard air springs there is a slight tension to the ride quality rather than the cushioned, pliant gait that you find in a true luxury limo, but to call the ride uncomfortable would be somewhat unfair.

The E-Hybrid starts up in electric mode by default, so it pulls away from standstill almost silently. It has enough performance in electric mode to find its way through congested urban traffic quite gamely, but on the open road you’ll soon want the assistance of the combustion engine.

Like most modern turbo units the V6 is responsive and eager from the lower reaches of the rev range, but it’s far from characterful and the soundtrack is bland at best and thrashy at worst. Sure enough, 456bhp and enough torque to reel in the moon do make the Panamera feel urgent in a straight line, but the Turbo version is more crushingly accelerative.

The new eight-speed PDK gearbox, meanwhile, does deliver faster, more immediate shifts than the previous automatic transmission, as you would expect, but it can feel snatchy and grabby at times rather than being creamy smooth.

Still, that’s a minor annoyance compared to the frankly bizarre brake pedal, which shuffles up and down so feverishly against the weight of your foot as the computers juggle regenerative braking with the normal kind that you think there must be something wrong. Blending those two methods of braking seamlessly is a fiendishly difficult thing to do and, as it stands, Porsche is yet to master that art with this car.

On the positive side it feels unusually agile and alert along a twisting road for one so big and heavy and it finds huge grip in the road surface, too, but it isn’t fun to drive in the conventional sense. Instead, it feels sure-footed and very safe. The steering, meanwhile, is precise and more or less slack free, but you can guide the car through corner after corner without ever feeling the rack load up. It’s just completely digital.

The new Panamera is a mighty, indomitable five-door grand tourer. The E-Hybrid will return the best fuel efficiency of the whole lot around town and for certain buyers that’ll make it the clear choice, but it’s a very long way from being the sweetest, most enjoyable Panamera to drive.

At £79,715 the Panamera 4 E-Hybrid slots into the middle of the Panamera range. The E-Hybrid’s biggest problem, at least for those who cover longer distances with any sort of regularity, is that the £91,788 4S Diesel is the better overall package, and faster with it.