Even in an era when no niche goes unfilled, the idea of Mercedes-AMG introducing a four-door coupe does seem a little odd when Mercedes-Benz already offers such a thing, in the form of the CLS.

The AMG GT 4-Door is exclusive to the performance division, though, and aims to mix four-door practicality (actually five-door – the rear luggage area is accessed through a hatch) with the dynamics of the AMG GT coupe. A tall order? 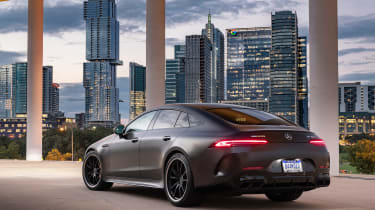 The AMG GT63 S 4-Door instantly attracts attention as the most powerful AMG model currently on sale – and the second-most powerful ever, after the old SL65 AMG Black Series. Using the same 4-litre twin-turbocharged V8 as other 63-badged AMGs, the 63 S 4-Door develops 630bhp between 5500 and 6500rpm, and 664lb ft of torque from 2500rpm to 4500rpm.

It does so through a nine-speed automatic transmission and a 4Matic-badged all-wheel -drive set-up. Drive to the rear wheels is permanent, with the front pair called into action when that 664lb ft is too much for the rears to handle alone. Like the E63 S, S versions of the 4-Door also feature a drift mode within their menus, diverting the full whack to the rear tyres.

That much power and that much traction result in a 0-62mph time of 3.2sec, and a top speed of 196mph – like the coupe, the 4-Door has no electronic limiter. 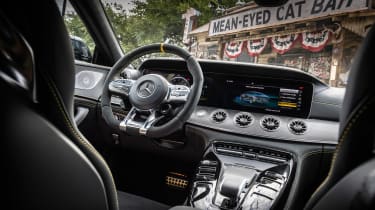 Structurally the AMG GT 4-Door shares little with the front-mid-engined coupe. Instead, it’s based on Mercedes’ MRA platform, also used by the E-class and CLS, albeit significantly strengthened. Strut towers and subframes are aluminium, the rear bulkhead and boot floor are carbonfibre, and high-strength steel is used for the myriad crossmembers used to stiffen the shell. Despite the use of lightweight materials, the 4-Door is a heavy old beast – in 63 S form it clocks in at 2045kg.

Dynamic Select is standard, backed up by AMG Dynamics, which continually adjusts various parameters – engine response, dampers, rear-wheel steering – according to driving demands. Drive modes vary from the softer ‘Slippery’ mode to Race, the latter setting each variable to its most extreme and enabling Sport Handling Mode and fully off settings for the ESP.

Drop into the 4-Door’s bolstered buckets and links to the GT coupe are less than clear. It feels more like an E-class in here – the AMG GT’s low-slung seating position and view over a long, prominent bonnet are absent, and despite using a similar broad centre console, the dashboard architecture is otherwise more like Mercedes’ conventional saloons, with a wide dual-screen display and jet-style air vents. Ride and refinement are similar, too, feeling quiet and relaxed at speed but occasionally a little stiff-legged over harsher surfaces.

The engine fires to life with the same rumble and accelerates with the same insistent, sustained surge and keen responses we’ve enjoyed in every AMG with this power unit, and emits the same bellowing roar under full throttle, too. With all-wheel-drive traction to call upon the GT63 S is hugely fast, hooking up instantly and lunging for the horizon with the same conviction as the coupe.

In fact, it’s easy to forget you’re in a vehicle that tops two tons. It certainly accelerates like a lighter one, but more impressively it’s agile in corners, too. The four-wheel steering really helps in tighter turns, and on a dry road you’re unlikely to experience understeer unless you’ve really overdone it. 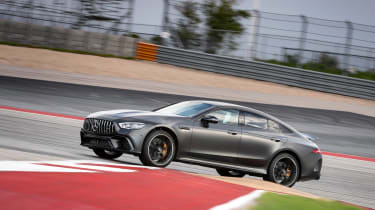 At Circuit of the Americas in Texas in 36deg C ambient heat the front did eventually start to push, but the car’s ability to change direction through quick chicanes is remarkable. You can turn in with reassurance, feeling the front tyres bite through the steering – and confident that you can power out far sooner and with more security than in the rear-drive coupe. Unless you choose not to – with so much torque on tap and the option of drift mode, the choice is always yours.

There’s good feel through the brake pedal, too, and while braking belies the car’s weight to some degree, they remain powerful even when the pedal begins to go soft. It’s easy to forget there’s another pair of seats behind you – on both road and on track, the 4-Door feels closer to the coupe than it does any conventional AMG saloon. It’s fast, engaging and entertaining, and a welcome addition to the AMG portfolio.

Perhaps the 4-Door’s closest rival is the regular AMG GT coupe – not a lot separates their performance or dynamics and the larger car is undoubtedly more usable, though it’s also more expensive.

A more traditional rival is the Porsche Panamera – a Turbo S E-Hybrid is a couple of tenths shy on the 0-62mph sprint and comes in at a similar price. There isn’t yet an RS7 version of the latest Audi A7 and we’ll have to wait a little longer for an M8 Gran Coupe, but both will offer different takes on the supercar-baiting four-door coupe formula.