Swift, desirable and luxurious, the latest CLS gives its rivals plenty to think about 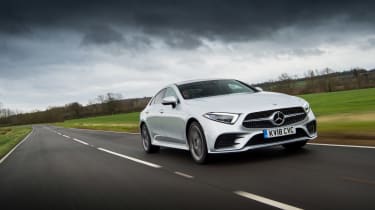 Now in its third generation, the Mercedes-Benz CLS serves to offer potential E-class buyers a more sleek and dynamic driving experience at the expense of some utility.

The original CLS was among the first of its type (joined, albeit a class or two lower, by the original VW Passat CC) but has since had to fend off competition from BMW’s 6-series Gran Coupe and the Audi A7 Sportback.

The latest CLS isn’t quite as dramatic as that original car but few would argue it’s not a visual improvement over its immediate predecessor, but with a new A7 now on the market and the 6-series Gran Coupe soon to be replaced by a striking 8-series Gran Coupe, the CLS needs more than just looks alone to compete. 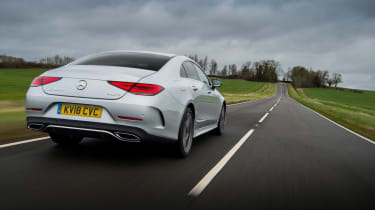 As the name suggests the 400d features diesel power, receiving Mercedes’ new 3-litre inline six-cylinder diesel powerplant in place of the old V6. It sits in the middle of the new range in terms of power, developing 335bhp from 4400rpm, and at the top of it for torque with a full 516lb ft on offer between 1200rpm-3200rpm.

This in turn makes it the quickest of the non-AMG CLS models (currently, the hybrid-assisted CLS53 sits atop the CLS range), reaching 62mph in five seconds flat, and reaching a 155mph electronically-limited top speed.

All CLS feature 4Matic all-wheel drive and all use Mercedes’ latest nine-speed torque converter automatic transmission as standard, dubbed 9G-Tronic. Fuel economy figures haven’t been homologated at the time of writing, but on the current NEDC test Mercedes estimates a 47.9mpg average and 156g/km of CO2. These figures seem entirely plausible - in our time with the car it comfortably achieved figures in the 40s, and more than 50mpg on a run up the M1 from Northamptonshire to Yorkshire. 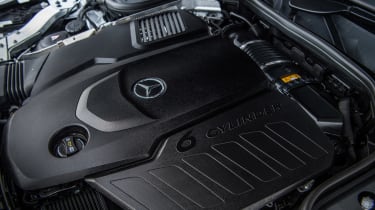 AMG Line trim is standard for the UK which results in the subtle styling kit seen here. 15mm lower sports suspension is standard, with multi-link suspension at both ends, suspended by coil springs and passive selective dampers.

In other words, changes to damping force are hydromechanical rather than electrically actuated, with bypass channels to allow for better absorption of high-frequency bumps but better control over high amplitude changes - such as undulations or during cornering. Steering is via electrically-assisted rack and pinion and the CLS 400d comes in at 1935kg at the kerb. 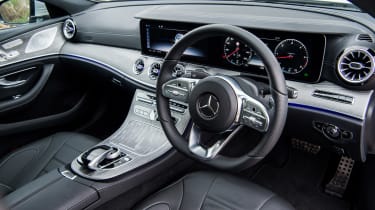 If you’ve just put an order in for the new Audi A7 then you’ll probably want to skip this section. Only in terms of interior quality and wind noise suppression is the Audi better than its rival from Stuttgart, and in neither area is it far enough ahead of the CLS to justify it over the way the Mercedes drives.

Not that the CLS is perfect - it’s a large, heavy saloon and a diesel one at that, so it’ll never earn itself a space in evo Car of the year - but at its core this is a car with an excellent drivetrain and fluid chassis, one that’s both responsive and composed in equal measure and together enable its driver to make swift and satisfying progress.

The experience starts with a comfortable and inviting cabin, whose broad layout is similar to that of the E-class and S-class but, thanks to the low roofline and slim side windows, feels more cosetting than either. There’s enough adjustment in seats and wheel to find the ideal driving position, though the sheer range of options means you may spend a week or two refining it.

The 400d’s straight six is one of the best six-cylinder diesels currently available. It’s smooth and refined from the moment you start it up and continues to spin smoothly even as you aim for the red line. Even the engine note is appealing, akin to a petrol straight six but an octave lower, and made even better by the surge of torque thrusting you forwards as you listen to it. 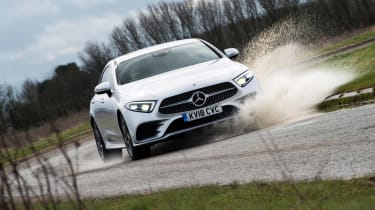 With all-wheel drive there’s no problem with traction even using the full extent of the engine’s performance, and shifts from the nine-speed gearbox are swift and virtually seamless, responding acceptably quickly to paddle flips when you switch to manual mode.

The chassis is well matched to the engine. The steering is surprisingly responsive and feels well-weighted too - relatively light, as you’d expect from a luxury-orientated car, but resistance builds up naturally and you can introduce extra weight by switching to the Sport or Sport+ modes. There’s good balance to the chassis and deep reserves of grip - you’ll rarely encounter understeer, and while the tail will rotate by a few degrees with a lift of the throttle it never gets close to feeling unstable or unwieldy.

It’s all backed up by excellent stability on the motorway and a fluid ride quality that only really struggles over shorter, sharper intrusions. Sometimes these will send a shudder through the body, but otherwise the CLS flows along the average A-road in a manner not dissimilar to an air-sprung S-class. On passive suspension, switching to one of the sportier modes makes no difference to the dynamics - but even without that option, body control on twistier roads seems better than you’d expect given its easy-going nature elsewhere. 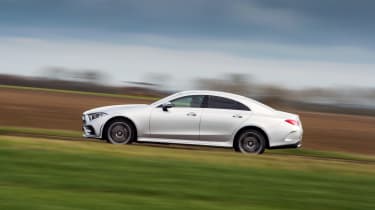 The Mercedes bests the Audi in terms of power, torque and performance (the A7 reaches 62mph in a still-impressive 5.7sec), and as we’ve detailed above, it’s both more comfortable and more enjoyable on the road too. Audi’s 3-litre V6 TDI is an impressive engine in its own right but it can’t quite match the Merc’s silken six for refinement or aural appeal, and we’ve misgivings about the A7’s ride quality, which struggles more frequently than the CLS over less than ideal surfaces.