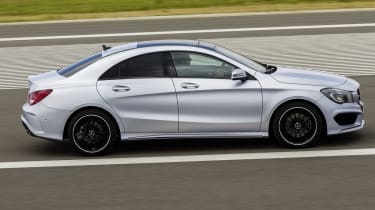 What is it?The Mercedes CLA180, an entry-level four-door coupe, based on the same front-wheel drive platform as the new A-Class. Designed to appeal to younger buyers, this is the cheapest model in the CLA range, endowed with a 1.6-litre turbo petrol engine. The CLA180, as tested here in AMG Sport trim, starts from £24,355.

A turbocharged 1.6-litre petrol engine, a unit shared with Renault, powers the CLA180. With 122bhp and 147lb ft of torque, it’ll never set the world on fire. It comes with a six-speed manual gearbox as standard, and unusually for a Merc, there’s no automatic option. The CO2 figure comes in at 130g/km, which also equates to a combined claimed 50.4mpg figure.

The good news is that under normal driving conditions, the CLA feels very much like a traditional Mercedes. First impressions suggest that the 1.6 turbo engine is a bit flat, but the turbo four-pot does start to wake up higher in the rev range. You really notice the lack of low-down punch when accelerating in higher gears, and if stepping out of any comparable turbo diesel, you’ll certainly crave more torque.

With a long and slightly inert action, the six-speed manual gearbox doesn’t feel particularly nice to use. The ratios are nicely stacked though, and can be used to hustle the Merc along relatively quickly, settling down to a relaxed pace once up to motorway speeds.

If you want ride quality, the optional AMG sport suspension fitted to our test car isn’t for you. Sitting 20mm lower than the standard set-up, it’s harsh at best. Although adequately damped on smooth and moderately rough roads, the suspension struggles to keep up on bumpy, undulating B-roads. But then maybe that’s not the point of this car.   Aside from being overly firm, the chassis is actually nicely balanced, with huge grip levels from the 225/40 R18 tyres. Objectively the CLA barely puts a wheel wrong; there’s a noticeable lack of body roll, and on the limit it’s ultimately the front end that will let go first. The mild understeer makes the CLA a safe and capable handler, but could never be described as a drivers’ car.

The thick-rimmed AMG steering wheel feels good, and the rack is well weighted and direct. When combined with the excellent feel and progression provided from the brakes, it makes for a natural driving experience.

As cars go, the CLA is pretty much in a class of its own. Although it shares a platform with the A-class, the larger CLA carries a £3000 premium over the equivalent model, and comes in at around he same price as the more powerful A250.

For the same basic price, you could have a BMW 125i M Sport, or pretty much have your pick of the VW Golf range, including the GTI. In the end, it really boils down to how much you like the dramatic coupe styling of the CLA. Tick a few option boxes, and you are firmly into BMW 3-series and Mercedes C-class territory.

It might look all shiny and new on the outside, but when you’re sat inside, it’s pure A-Class. There’s a big boot too, but thanks to that swooping roofline, rear seat passengers will be very cramped. But then again, it is dubbed a coupe...