Our CLS was never a huge thrill generator, but as luxurious transport, it was a delight 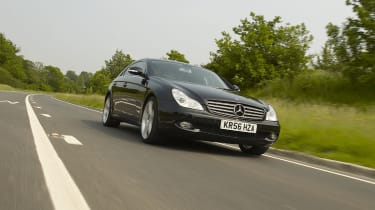 Morrison’s car park, Herne Bay, one cold and frosty morning last December. I’m making a few mobile phone calls from the snug, obsidian depths of our CLS 350 CGI’s cabin when I spy a slow-moving old boy approaching from the east. I can see that it will take him a while to reach me, so I don’t meet his gaze for a few minutes while I finish the call. Finally, he shuffles to a standstill by the driver’s door and taps meekly on the window. He looks harmless, if slightly awestruck. So I power down the glass and smile weakly. He speaks: ‘What a beautiful car.’

The statement is delivered in a husky whisper, almost as if he’s in church. ‘Never seen anything like it,’ he continues after a brief pause, giving ‘like’ a weighty emphasis and rising cadence that suggests genuine bewilderment. He steps back and lets his eyes scan the length of the bodywork. ‘Corr…’ He swallows hard and the bristles on his Adam’s apple perform a miniature Mexican wave. ‘Looks as if it’s landed from another planet… but why here?’ And with that he pats the bonnet and wanders off towards the town. As I look around at the rusting white Transits, sun-bleached 205s and ranks of holiday coaches, I have to concede he has a point. But thank you, sir. You summed up my thoughts about the CLS precisely. Fact is, it has never required a slow day at Morrison’s to stand out from the crowd. In a CLS you turn heads period, especially if you’ve taken the trouble to massage the drama of its low-slung stance and quasi-coupe proportioning at the speccing stage. Egged on by Mercedes’ PR department – after all, they had a vested interest in the car’s future after its return 12 months on – we eschewed subtlety for maximum black (paint, leather, wood, tints, the works), the largest AMG wheels and no badges. A little to our surprise, the result wasn’t the kind of car you’d expect to see on an MTV Cribs rappers special, but a rather remarkable exercise in stunning through stealth.

Through price, too. Once we’d finished with the options catalogue we were looking at the thick end of £60K, which was probably a tad excessive for a CLS toting the smallest petrol engine. We could have had a less extravagantly kitted, V8-engined CLS 500 – with the best part of an extra 100bhp – for less money. But, at the time, the attractions of the Harman Kardon 11-speaker Logic 7 surround sound system, seats that massage your back and give your torso a reassuring squeeze when you go round a corner and air suspension were too seductive to turn down. After a year and 14,000 miles, though, I think the 500 would have been a better bet – indeed, the optimum CLS. For all its undoubted efficiency, and a pleasing full-throttle growl, the 292bhp 3.5-litre V6 never really propelled the CLS with sufficient force to thrill or, come to that, fully exploit the potential of an excellent chassis, the damping performance of which was a highlight and comfortably trounced that of a new C320 CDI I recently had in for test.

I’d give the 19in AMG alloys a miss, too. Whether too many close encounters with pot-holes damaged the first set (which had to be replaced after a worsening vibration) I guess we’ll never know. The new ones sailed through the remaining 7000 miles, but clearly did the ride no favours. On balance, I’d settle for a little extra comfort over looks, given how much of the latter the CLS has to spare.

The door ‘tizz’ never did fully disappear and the nearside door mirror still pointed skywards to ‘aid’ reversing, but too few Mercs have a quirky sense of humour. This one has been a delight to live with for the past year: swift, quiet, dynamically gifted, materially durable, a fabulous thing in which to take on a long trip, and an even better thing in which to arrive. I’ve loved every second of it. All it lacked was excitement.