The second generation CLS is here. Can it repeat the success of its predecessor? Review and full hi-res gallery here. 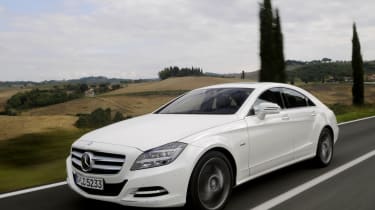 It’s the second generation Mercedes CLS – the E-Class-based saloon/coupe crossover that rewrote the rulebook when it first arrived in 2003 and proved a huge sales success with over 170,000 sold around the world. Merc aims to repeat its success with the new version by using design details from the SLS supercar, four new engines and a clever new steering system. It goes on sale next March with prices announced this December.

We usually harp on about the engine here (we drove the CLS500 which confusingly now uses a 4.7-litre 402bhp unit, but with twin turbos for the first time, which should mean 30mpg+ and sub 210g/km of CO2), but to be honest the most interesting feature of the new car might well be its steering. It’s a pure electric system, but has none of the pulsing, inconsistent weighting and surging assistance that so often afflicts these set-ups. In fact it feels surprisingly natural. Merc is very proud of the fact they’ve used 250 separate parameters to tune the set-up and also that there’s no assistance at all when travelling in a straight line. That alone has improved fuel economy by around five per cent.

As you might have guessed the steering is a definite plus – there’s not a colossal amount of actual feel, but the weighting, consistency and general response through the helm is very good indeed. The car itself rides well, has excellent body control and the new turbocharged V8 sure does fly when asked. I’m still not convinced by the latest 7G Tronic gearbox, which makes a meal of manual shifts and is far better left to its own devices, and I have to admit that the whole CLS experience is rather soulless. It’s much more together than an E-Class and actually feels tolerably nimble, but there’s little actual fun on offer. That’s not the point of this car, though. ‘Refined sportiness’ is what Mercedes aims to offer and that’s what they’ve delivered. There are sporting elements to the handling, but no edge or drama: think accomplished rather than exciting.

When the first CLS arrived seven years ago it had no direct rivals, but this time Audi is already waiting with its A7 Sportback. Both will trade on their looks and brand image and if I’m being honest I don’t think either is as bold or elegant as it could and should be.

If you’re thinking that not many people will buy the V8 CLS500, you’re right – it’s not going to be the range’s volume seller. But nor is the CLS350 CDI. Instead the sales badge of honour is likely to be taken by the CLS250 CDI. That’s right, a four cylinder CLS, aimed at the fleet buyer. Should do well, but does anyone else think its presence devalues the CLS brand?