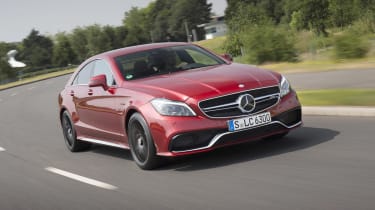 In both four-door Coupe and rakish-estate Shooting Brake form, the Mercedes CLS63 AMG has long been one of the more characterful German heavyweights. It occupied an alternative territory to its E63 AMG stablemate or BMW’s M5; it was only really concerned with long-distance luxury and sports car-crushing straight-line pace, leaving the E63 and M5 to trouble themselves with such vulgar contemplations as steering feel and turn-in agility. With more power and minor upgrades inside and out, this facelifted version, badged CLS63 AMG S, should offer more of the same. Prices start at £86,500.

Among the options is Mercedes’ pioneering Multibeam LED lighting technology. Each headlight contains a grid of 24 diodes, which together project a brighter and more expansive beam of light than a conventional xenon unit. They also afford a range of driver-convenience adaptive functions such as anti-dazzle main beam and anticipatory corner illumination. Mercedes’ ‘Connect Me’ system allows owners to connect to their car via their smartphone to check fuel levels, lock the doors and so on.

The output of the twin-turbocharged V8 has risen for this AMG S application by 28bhp and 59lb ft, to 577bhp and 590lb ft respectively. That’s enough for a claimed 4.1sec 0-60 time and an inevitable electronically limited 155mph top speed.

A consequence of that lowered roofline is that the header rail feels unusually close and headroom rather tight. It takes a little while to adjust to this intimacy and initially the effect can be a touch claustrophobic, but a few miles down the road that impression does pass. This is a high-quality and cosseting space in which to sit, a result, partly, of the cushioned ride. There is an underlying firmness that one should expect of a high-performance saloon or estate, but with the dampers set to their comfort mode there is a luxurious compliance, particularly over smaller surface imperfections.

Dynamically the new CLS63 is unchanged over the pre-facelift model, which is to say that with the dampers flicked to a firmer setting and the stability control peeled back a little it can be hustled at speed down a twisting stretch of road, but that sort of behaviour never really feels in keeping with the car’s character. It’s happier and more adept at reducing long journeys to a short hop or accelerating down a road at a rate that would humiliate Porsche 911 drivers.

It would take a back-to-back comparison to really identify that extra power and torque over the old, 549bhp CLS63, but suffice to say it feels thumpingly quick in roll-on terms, even from lower down the rev range. Throttle response is fairly sharp, but it’s let down by the 7G-tronic automatic gearbox, which feels just a tad dimwitted and outdated on its way down the gears compared to the latest twin-clutch units.

Traction is very good given the vast torque on tap across the engine’s range, thanks in part to the standard-fit limited-slip differential. The four-wheel-drive 4Matic system, which would seem to suit the CLS63’s intended role quite well, won’t be available to UK buyers.

The sports saloon market appears more bustling than ever, with the Audi RS7, BMW M5 (and its pricey M6 Gran Coupe relation), Jaguar XFR-S and Mercedes’ own, more prosaically styled E63 AMG providing the facelifted CLS with competition. The loony Vauxhall VXR8 is, with 576bhp and a £54,499 price tag, an esoteric ‘value’ option. In keeping with tradition, though, the M5 is our class champion.

The styling revisions are subtle to say the least, the most prominent of them being the new lower air intake surround that brings the CLS in line with Mercedes’ recent all-new models. The grille has also been revised and the rear lights have been darkened for a more sinister appearance. The cabin is largely unchanged, save for the new tablet-style central screen.