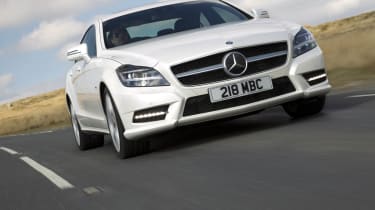 'A Mercedes is not a Mercedes if it doesn’t have more of everything,’ we were told at the launch of the new CLS. That’s an odd phrase (it’s not the only one; we’ll discuss ‘refined sportiness’ a bit further on), particularly with reference to a car that so obviously sells on the strength of its looks.

After all, you can add more power, more gadgets, more speed, but beauty is not a tangible, measurable thing, so how do you add more of it? Not like this, I’d argue. Design is a subjective area, true, but to my eyes the new CLS has lost all the subtlety and elegance of the first-generation car. The clumsy, overwrought rear arches of the new model are, for me, the worst offenders.

Now, since 80 per cent of the 170,000 buyers of the first CLS cited the styling as the primary reason for their purchase, this facelift could be viewed as a high-risk strategy. Mercedes, however, has given the CLS every chance of hitting its sales targets by making it available with a four-cylinder turbodiesel for the first time. And while it might undermine the CLS’s premium status, that 204bhp model will undoubtedly be the big-seller. We, of course, are more interested in what goes on at the other end of the engine line-up, which is where we find a new 4.7‑litre twin-turbo petrol V8…

I’ll be honest, it took me a while to realise it had turbos at all. Their presence is betrayed by a faint whistle at high engine speeds, but the power delivery is very measured – the V8’s inherent low-rev grunt ensures there’s little noticeable lag, and the smoothly applied boost means the CLS calmly accrues speed at a very brisk rate, the soundtrack no more than a bassy thrum. That’ll be the ‘refined sportiness’.

Refinement is the lead characteristic of the driving experience, too. For starters you feel perfectly at home in a cabin that, in terms of comfort, design and sense of space, is a marked improvement over the old car. Unlike the more controversial aspects of the bodywork, it’s not especially dramatic inside, settling instead for providing a luxurious environment that doesn’t naturally encourage keen driving.

It doesn’t help that the area of northern Italy that Mercedes has chosen for the launch is chock-a-block with tiny, windy roads that do nothing to flatter the CLS. On wet, autumnal tarmac, twin-turbo torque easily overcomes rear-wheel-drive grip (interestingly, a four-wheel-drive CLS will be available for the first time next year). Body movements, however, are kept tightly in check by the 500’s standard air suspension. This is one of the better systems we’ve tried, able to round off most of the sharp-edged bumps that often fox such set-ups.

The steering is even better. I’m gobsmacked when I learn that this is an all-electric system. The smoothness and crispness of response, the weighting and power assistance are such that it feels like a hydraulic set-up. There’s still no natural feel, but for once this is an electric system that isn’t off-putting.

This ought to bode well for the handling, but as with the design, Mercedes seems to have tried to ‘add more’, and as a result the CLS has a supremely competent feel that fails to stir any genuine emotion. I expect this level of accomplishment will find favour with the people it’s aimed at – it is a typically well-engineered Merc; the stiffer AMG-sourced front axle works in harmony with the steering to make it easy to place the car where you want it and it is much more nimble than a standard E-class. I’m sure it’s precisely the car Merc wants it to be, but at the moment (until AMG gets to grips with it, fingers crossed) it’s not quite the car we want it to be.