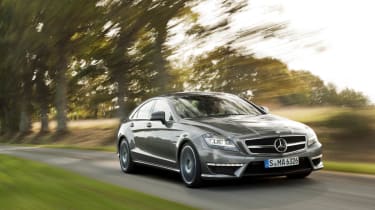 'Just don’t go near the Mexican border. It’s terribly dangerous these days.’ The words of my mother when she learned of the location for the CLS63 press launch, showing, I have to confess, a much better knowledge of where San Diego is than I had. This wasn’t going to be just another car launch…

Her words are still ringing in my ears three weeks later as I glance out of the driver’s side window of the CLS63 at the wild and scrubby hills abutting the road. Not more than half a mile away, snaking along the high contours, is the most enormous, angry-looking fence. I say fence, but think more Berlin wall with added spikes. Seems Mother Catchpole wasn't over-stating it. In the pre-drive briefing, the Mercedes bods had informed us sternly that we must take our passports for the police checkpoints and that this would not be a good part of the route to start doing burnouts…

Sure enough, there seems to be a border cop loitering behind every rock as we meander along what would otherwise be a pretty decent bit of road. The burnouts will have to wait…

We’ve also been advised that, should we be stopped, we’re to take the key out of the ignition. The reason is that this new CLS has CO2-reducing and mpg-improving stop/start technology. So imagine the scene. You pull to a halt as requested by the policeman. The engine stops in a very ecological way to keep emissions down. The cop starts asking lengthy questions about funny accents and where you’re going. A few minutes into said conversation the car has had enough of running the air-con on just battery power, so starts up again. Cop thinks you’re about to do a runner and pulls out his weapon. Tears before bedtime.

Of course, if you did want to do a runner, then I think you’d have a pretty good chance of getting away in the new CLS63. With 518bhp and 516lb ft as standard – or 549bhp and 590lb ft with the optional Performance Pack, which increases maximum boost pressure from 1.0 to 1.3 bar – performance in a straight line is certainly sufficient to lose a 4x4 with twinkly lights on top. Mercedes claims 4.4sec to 62mph (4.3sec with the Performance Pack) and, although the top speed is limited to 155mph, you can raise that to 186mph if you purchase the optional Driver’s Pack (which also gets you a place on a training course at the AMG driving academy).

The monstrous engine that is creating all these numbers is the new 5.5-litre twin-turbo V8, which so far we’ve only seen in the heavier S and CL classes. It’s a mighty thing and so linear in its delivery that if it didn’t run into a rev-limiter at a relatively lowly 6400rpm then you’d almost think it was naturally aspirated. It burbles and rumbles and, just occasionally, when it’s turning over in the foothills of its rev-range, it sounds like a big unsilenced Harley Davidson. In other words it’s a proper AMG engine – and it makes the CLS feel like it could tow a 747 right up to take-off speed.

Of course, the border police might want to stop the CLS just to have a better look. The designers have, to my eyes, markedly improved the lines of the four-door coupe. I know many thought the old CLS was a very elegant car, but to me there was a bit too much of the upside-down banana to its profile, so that it looked like it might be as fast backwards as forwards. The new car has a much more aggressive bonnet and a more muscular rear, while still retaining its long-wheelbase elegance. The CLS63 also features LED headlights as standard and the 71 lamps certainly make it look distinctive in a rear-view mirror.

Inside, the new CLS has shades of the gullwing SLS. The flat-bottomed steering wheel (wrapped partly in Alcantara if you choose the Performance Pack), the lovely clear dials and the stubby gear selector with the crest of Affalterbach embossed in the top, all call to mind the SLS interior. The seats are enormously comfy and even massage your back very nicely, but they need a bit more lateral support in a car this fast…

Heading through the Laguna Mountains a little way north of the big scary fence, the CLS proves to be truly monumentally quick. There are three damper settings and the steering weights up progressively with each one, so much so that in the firmest setting you use your shoulders rather than just your wrists to work the wheel as you turn into a corner. The lateral grip the chassis generates is phenomenal, and through the miles of rock- and drop-lined bends the CLS is almost uncomfortably fast as its ruthlessly controlled roll and utter composure see you pushing the lateral G (and your bravery) ever higher in search of some limits. The traction at the rear feels almost unimpeachable, too, so that you’re really encouraged to use all the power on the exit of corners. When you’ve got 549bhp on tap, that is some achievement.

For me, there is almost too much grip – the CLS63 lacks the beautiful subtlety of adjustment that you can enjoy in the very best AMG cars (the SLS and C63), but you still get to the end of a road in awe of the brutish speed you’ve just carried through the corners and the iron-fisted composure of such a big car.

The optional carbon-ceramic brakes fitted to our 63 (denoted by the orange calipers) match the cornering and traction in terms of outright retardation, but, as with the SLS, I think the standard steel items give a fraction more feel. One aspect that is actually better than in the SLS is the gearbox. The (deep breath) AMG Speedshift MCT seven-speed sports transmission is an automatic but with a wet start-up clutch instead of a torque converter. It is still not the very snappiest ’box, but it is so much more responsive than AMG’s dual-clutch transmission.

How much for all this AMG mightiness? Although the CLS63 is £80,605 in standard trim, this can quickly rise with a few tempting options: The Performance Pack is £6495, the Ride Control performance suspension is £1495, a limited-slip diff is £2450, the Driver’s Pack is £2760 and the carbon-ceramic brakes are a whopping £9300. All this would take a CLS63 AMG to a Porsche Panamera Turbo-rivalling £103,105, which is a lot, even for a car as deeply talented as the stylish new Mercedes.